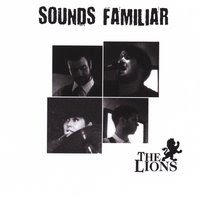 Familiar, indeed.  Calgary’s own The Lions released their full-length debut CD in 2008 under the moniker Sounds Familiar.  Sounds Familiar is a brilliant mesh of garage, surf, rock and Americana influences that sounds as fresh as it does familiar. Sounds Familiar is approached from styles that would be very comfortable on your local oldies station, but updated to sound modern and new rather than antiquated.

Opening with an ode to the 1960's - the guitar riff from Secret Agent Man, the Lions quickly bring you into today with In The Long Run.  In The Long Run could be the working class anthem of today ("In the long run/we're gonna make it out of this hole").  Good Time Girl draws on a garage sound with a big full guitar sound and a bass line that will drive you around for a while.

The Lions show their easy-going, Orbison-esque side on It's Not Love, and their fun side on Yeah Yeah (Yeah Yeah).  Here they come across as a Kinks/Clash hybrid.  Other highlights include Girl Like You and the exquisite Doesn't Matter To Me, which is joyous and melancholy all at the same time.

The Lions aren't stuck in the 1960's, but they've definitely taken the tour a number of times.  They've managed to take their interpretation of that particular era of rock and make it fresh and new for the twenty-first century.  They come across as a high-energy band where the love of music trumps everything else.  They are a pleasure to listen to, and Sounds Familiar is an instant classic.

You can learn more about The Lions at www.thelions.ca or www.myspace.com/thelionsrockband.  You can purchase a copy of Sounds Familiar at www.cdbaby.com/lionsrock, or you can purchase digital downloads through iTunes.
Posted by Wildy at 6:10 AM