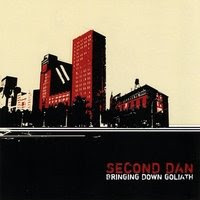 Second Dan was an Australian band that mostly got left behind. The band decided to move to New York City to try to make it. Singer/Songwriter Dan Rosen came first only to find out after he was here that the rest of the band wasn’t going to come. Rather than be bereft, Rosen rebuilt Second Dan from some of New York City’s finest musicians. Now 2008 sees Bringing Down Goliath, an aptly name return.

Bringing Down Goliath is a jumble of feel-good, guitar-driven rock & pop songs. It has a very organic feel, like friends sitting around and jamming on songs they all know and love. The listener is left with the impression of a band that is making music for the pure joy of making music. A prime example is I Met A Girl, with a crunchy guitar motif that drives the song like warm weather and good friends on a Saturday night. Bringing Down Goliath is chock full of feel-good Rock N Roll. Highlights include Love And Innocence, Everything Is Good, Forget To Remember and Duwachuwant.

Second Dan shines a bright light in an industry that seems to love its ironic, sardonic and vaguely depressed rock stars. Bringing Down Goliath displays the same sort of feel-good energy and down home comfort as the best of Bob Seger's recordings. It's a definite Rock N Roll Party record.

You can learn more about Second Dan at www.seconddan.com. You can purchase Bringing Down Goliath at www.cdbaby.com/cd/seconddan.
Posted by Wildy at 6:56 AM