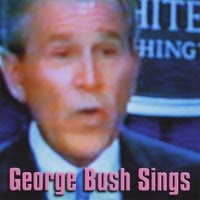 Jon Hartmann is a consummate musician with a wicked sense of humor. Hartmann has strong roots in rock, jazz, reggae and Afro-Cuban styles, and he has recently started playing with electronic manipulation of sounds (splicing and dicing, as it were). Enter President George W. Bush, otherwise known as mal-a-props-R-Us. On George Bush Sings, Hartmann takes 7 years of misstatements and snarky condescension and turns into something that just might vaguely resemble the truth (per the artist)

Now I am not defender of George W. Bush, but this album is something of a hatchet job disguised as a comedy album. What is comes down to is that if you like the current POTUS, then you will not like this album. If you are one of the many who disdain Bush, then you will probably like this album, or perhaps even find it funny. Hartmann takes snippets of speeches made by Bush over the years and pieces them together into a new narrative. This new narrative is one that will ring true with those who dislike Bush or disagree with his policies, but it fails the humor test, and in the end it is one person's piecing together of another's words, so veracity, if attained, is likely accidental.

Musically, George Bush Sings is very strong. Hartmann uses a mix of rock, funk and jazz motifs as beds for the spoken word component. Hartmann is obviously a very talented musician, but the music is somewhat wasted here, as the concatenation of Bush speeches becomes more of an annoying distraction rather than something that enhances the musical experience. I think I would have enjoyed this album much more if it were instrumental.

You can learn more about Jon Hartmann at www.jonhartmannmusic.com. You can purchase a copy of George Bush Sings at www.cdbaby.com/cd/jonhartmann5.
Posted by Wildy at 12:26 AM