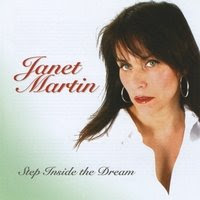 Janet Martin is a career musician with five albums under her belt, along with several US and European tours. The fact that you might not have heard her name until now is not a mark of the quality of her music by any stretch. Martin's songs deftly navigate the waters where rock, folk, country and Celtic styles meet. Step Inside The Dream may be her most dynamic release to date.

Janet Martin has a voice that is reminiscent at times of Bonnie Raitt and Annie Lennox, which is to say that it is entirely her own and unlike anyone else you might have heard. It's not unusual to find artists with strongly idiosyncratic voices in pop music, but Janet Martin is the real deal -- she can sing. And write. The songs on Step Inside This Dream are dynamic, smart and inspired. Highlights include Move To Town, Down To The Graveyard, Mercy Mercy and Gypsy Soul.

To say highlights in this case is point out which of the thirteen tracks are currently highest in my mind, but in truth there isn't a weak song here. Janet Martin has crafted an album in Step Inside The Dream destined to become an Americana classic. At the very least, Step Inside The Dream should be a critical darling.

You can learn more about Janet Martin at www.myspace.com/thejanetmartinband. You can purchase a copy of Step Inside The Dream at www.cdbaby.com/cd/martinjanet.
Posted by Wildy at 6:38 AM

Janet Martin shows enormous talent and creativity. Equally amazing on-stage. Following her 6th European tour, her fans here only want to know "when and where does the 2010 Janet Martin Band tour start" ?