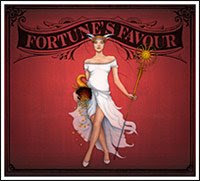 Great Big Sea has the distinction of being the biggest and best export that New Foundland has ever managed. Fifteen Years after the release of their debut, self-titled CD, Great Big Sea is back with their 9th studio album, entitled Fortune's Favour. Fortune's Favour is a watershed album for Great Big Sea, who placed themselves in the able and eclectic hands of producer Hawksley Workman.

Great Big Sea displays a newfound sense of largesse in their sound that suits the songs on Fortune's Favour very well. Opening with the buoyant and light-filled Love Me Tonight, Great Big Sea brings a new pop sensibility to their Celtic/folk/pop mix. The album's first single, Walk On The Moon, is a paean to having the courage to fall in love. England returns to the band's roots of New Foundland sea songs, but retains the pop sensibility that Workman seems to have inspired in the band.

Fortune's Favour is one of those albums that longtime fans are either going to love or hate. It is a step forward artistically as a band, allowing Great Big Sea to make their sound more accessible to neophytes while spreading their wings musically. Some fans will hear this as moving away from the sound that got Great Big Sea where they are, but if you've followed their career, this is just a continuation of the musical growth we've seen from them in the past.

In truth, I can't find a weak moment on Fortune's Favour. One happy surprise is the punk-tinged Oh Yeah. And don't worry if you are one of the longtime fans who feel a little put out by Great Big Sea's continued growth -- they still know where their roots are. The Banks Of New Foundland and Rocks Of Merasheen are as New Foundland as you can get.

Just make sure that you check out Company Of Fools. This is the halcyon moment on Fortune's Favour, at least for this writer. Company Of Fools may go down as one of the finest pop songs I've ever heard, and probably should be given full force as a single. It is definitely in the Celtic tradition, and has a catchiness to it that rivals REM's Its The End Of The World As We Know It.

Great Big Sea has reached platinum status before, but Fortune's Favor is the sort of musical moment that could catalyze into much greater success. Hawksley Workman's steady hand has definitely brought out the best in the boys from St. Johns.

You can learn more about Great Big Sea at www.greatbigsea.com. You can purchase a copy of Fortune’s Favour on the band’s website, or at most US and Canadian retailers.
Posted by Wildy at 12:45 AM

Did you know "Company Of Fools" is an Alan Doyle/Russell Crowe (yes, the actor) co-write?