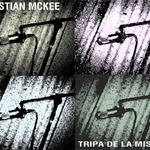 When the music's this good, you have to give it away. Christian McKee is an English songwriter with a decidedly non-commercial bent. His latest release, Tripas De La Miseria, is available for free download on his website. Generally if someone is giving away entire albums for free it's a sign they can't sell them. In the case of Christian McKee, it’s a sign of a different attitude about his music, because the songs and the album are definitely worth plunking your money down for.

Christian McKee has a voice that is terribly familiar, and I still can't quite put my finger on who it is (perhaps someone out there will chime in). That vocal familiarity lends itself to the general impression that you've heard these songs before. Tripas De La Miseria is like someone you went to high school with 20 years ago but don't recognize upon meeting again. There's something familiar. Tripas De La Miseria has an easy feel about it based in Christian McKee's mellow rock song. I particularly enjoyed Marlane, Just As Well, and Me & Georgina. Also check out Pop Song for a bit of fun.

This is light fare, mellow and entertaining pop songs with low-tech production values and something of an 80's feel (like songs you might have heard on the soundtrack to an 80's Brat Pack movie). I recommend it as a pleasurable listen.

You can learn more about Christian McKee at www.christianmckee.com, where you can download a copy of Tripas De La Miseria for free.
Posted by Wildy at 6:17 AM