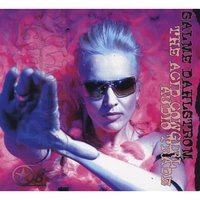 Sweden-born New York City resident Salme Dahlstrom is about to light up your ears.  This classically trained musician first landed in The States in 1999, and made waves as part of the New York City underground band aboyandagirl.  Yearning for the freedom of a solo career, she set about writing and recording The Acid Cowgirl Audio Trade in her NYC studio.

Ever the hands-on producer, Dahlstrom took up every role on the album, with exception of a couple of friends who cameo here and there.The Acid Cowgirl Audio Trade mixes a love of Fatboy Slim type dance music with classic rock and classic R&B flavors.  Salme Dahlstrom struts her stuff here for all it's worth.  Her sassy/sultry voice rocks, rolls and coos throughout.

C'Mon Y'All is a real treat, and probably the most danceable track here.  It has the sort of simple refrain and catchy melody that could become a major dance club hit.  I also very much enjoyed Hello California.  The lyrics were a bit on the simplistic side, but it's the chorus is bright and airy and sticks in your head.  My favorite song on the album though is Thinking About It...Baby, with Reality Check a close second.  Both songs show that Dahlstrom is more than a talk-singer, but is a multiple threat as an entertainer.

Look, this isn't music that's going to change the world, but it sure will get it dancing.  Salme Dahlstrom is a charismatic force majeure who should achieve big things with The Acid Cowgirl Audio Trade.  It's one of the best dance/rock albums I've heard in 2008, and should end up on some critics’ end of year top-ten lists.  Hopefully the general public will get wind of Salme Dahlstrom, because if they do you'll be hearing her everywhere for the rest of 2008.

You can learn more about Salme Dahlstrom at www.salmedahlstrom.com.  You can purchase a copy of The Acid Cowgirl Audio Trade at www.cdbaby.com/cd/salmedahlstrom.
Posted by Wildy at 11:39 PM