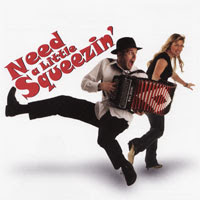 If you want to know how to make a party go mad with delight, you start with the band. You can go the traditional straightforward rock route, but if you want to appeal to a broad array of attendees you've got to have some variety in the sound. So you take elements of Rock, Country, Zydeco, Pokla, Klezmer and even some Jethro Tull-inspired flute playing and you mix them up into one musical super group. Or you could just pick up Need A Little Squeezin', the dynamic and wonderful new CD from Oshkosh, Wisconsin’s own Copper Box.

I'm guessing you'll likely never see Copper Box on MTV-2 or VH-1, but this is an incredibly entertaining band nonetheless. Need A Little Squeezin' works because it is firmly ground in the fundamentals and styles of music that has pleased crowds for ages, but has a modern edge and energy to it similar to the life Brian Setzer breathes into his music.

The title track, Need A Little Squeezin' starts off the album with a bang, with the wonderful (and sorely under-represented) vocals of Michelle Jerabek. Her voice has a true Nashville sound with just a hint of a rock edge to it, and is much more interesting than a lot of the bland voices that float out of Nashville these days. This is followed up by Apple Of Your Eye, which has some of the best Ian Anderson-inspired flute playing this side of, well, Ian Anderson.

Need A Little Squeezin' avoids the whole Lawrence Welk sound that I always envision when I see an accordion (although Hopeless Lover definitely rides the edge). What you get instead is a vivacious presentation of new songs in the Zydeco vein, or snappy, modern interpretations of the occasional classic (Jambalaya). Copper Box has created a musical framework that should (in theory) do for Zydeco what Setzer did for small-band swing a number of years ago. Need A Little Squeezin' is a rollicking good time, and will cause spontaneous smiling and dancing at any sensible party. It's a must-hear.

You can learn more about Copper Box at www.copperboxsite.com, where you can purchase a copy of Need A Little Squeezin’ as well as two of their other releases.
Posted by Wildy at 4:50 AM