CD Review: The Mumbles - Once EPonymous 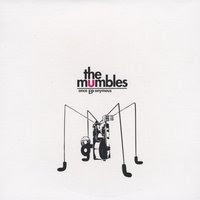 The Mumbles are a prime example of making lemons out of lemonade.  Keith Burnstein (vocals/keyboard) and Ethan Shorter (drums) were part of a fourteen-piece hip-hop band, and one night were the only two band members to show up on time for a gig.  After being urged by the club owner to go on as a due, they discovered a bit of magic playing as a duo that was missing from the larger band.  Moving on as the Mumbles, they since added Meredith Claire on vocals/guitar.  Their debut record, Once EPonymous, was released in May of 2008 and is an absolute joy to listen to.

Once EPonymous opens with Brass Tacks, which sounds like something Billy Joel might have written mid-career, and is actually quite brilliant.  The Mumbles move on to the reggae-influenced Suitcases.  We get our first listen to Meredith Claire's vocals on Bite Size (Brawn w/ Brio).  Claire sounds strikingly like New York City based singer/songwriter Rebecca Martin, formerly of Once Blue.  Bite Size comes across as a cafe jazz-influenced rock tune, and Claire and Burnstein show off some amazing vocal harmonies.  They sound as if they were meant to sing together. Angry Owners, Angry Dogs could be something that Billy Joel and Randy Newman sat down and tossed off together over cocktails.  It has some of those signature progressions that seem to show up on classic Joel albums with a breezy New Orleans flavor to it that suggests Newman had a hand in.  It's not so much that the Mumbles sound like either of these two; Burnstein just has a knack for writing songs that are instantly familiar in some way while being very much his own creations.  It's this little knack that sometimes makes a songwriter into a superstar.

The EP closes out with Long Legs On Little Bikes, more of a musical interlude -- the sort you might find in a movie score.   Once EPonymous is a musical breath of fresh air; original yet familiar.  The songs are inventive and not in any way formulaic.  The vocal duo of Keith Burnstein and Meredith Claire are entrancing to listen to.  The Mumbles, in short, are amazing.

You can learn more about The Mumbles at www.myspace.com/brooklynmumbles.  You can purchase a copy of Once EPonymous at www.cdbaby.com/cd/mumblesmusic2.
Posted by Wildy at 6:15 AM