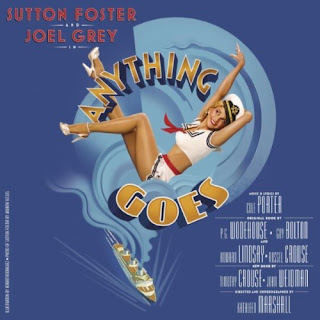 
Between the seminal performance of Ethel Merman as Reno Sweeney and the 1980's role as re-imagined by the incomparable Patti Lupone, it's hard to imagine anyone being brave enough to reincarnate the role on The Great Way, much less standing on par with those two great ladies of theater. Yet if you were to ponder the current and up-and-coming stars of Broadway, you'd eventually settle on the notion that if anyone could do it, it would be Sutton Foster. This must have entered the thinking of director/choreographer Kathleen Marshall. Turns out it was right thinking. Just take a listen to the new cast recording of The Roundabout Theatre's 2011 production of Anything Goes, and you'll wonder if anyone has ever worn Reno Sweeney so well.


This show isn't just about Foster's performance so well. She is surrounded with a superb cast that includes Broadway legend Joel Grey (Cabaret, Wicked) as Moonface Martin, Colin Donnell as Billy Crocker and Laura Osnes (Grease, South Pacific, Bonnie & Clyde) as Hope Harcourt. The show is based on the same book and score used in the 1987 Broadway Production with minor changes, but sticks very close to Cole Porter's original vision. Highlights include Foster's performances on "I Get A Kick Out Of You", "Anything Goes" and "Blow Gabriel Blow" and Grey's "Be Like The Bluebird", but the best chemistry occurs on songs such as "You're The Top" (Foster & Donnell); "Friendship" (Foster & Grey), and "It's De-Lovely" (Donnell & Osnes). Jessica Stone makes a nice turn on "Buddie Beware", backed by the whole ensemble. Her voice is part ingénue and part moll, an eclectic sound that's unforgettable and perfect for the role of Erma.


For all that goes well on the cast recording of Anything Goes, it doesn't quite have the pizzazz of the 1987 cast recording, but it seems attributable to the use of all digital technology which is as much a bane as a boon to musical purists. The cast, as a whole, is absolutely superb, and Sutton Foster and Joel Grey are everything you could expect and more, and Laura Osnes building on her inarguable credibility as a Broadway leading lady. It's easy to see why Anything Goes took home three Tony Awards this year, including Best Revival, Best Actress In A Musical (Sutton Foster), and Best Choreography (Kathleen Marshall). Ghostlight Records does it again, documenting a wonderfully vibrant revival of a classic show with a cast recording of Anything Goes that will draw you back again and again.


Learn more about Anything Goes at www.AnythingGoesBroadway.com or www.roundabouttheatre.org.  Anything Goes - The New Broadway Cast Recording is available from Amazon.com as a CD or Download.  The album is also available via iTunes.

In case you need convincing, check out this clip from the Late Show with David Letterman:
Posted by Wildy at 5:00 AM