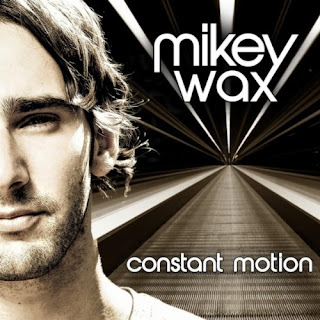 Mikey Wax – Constant Motion
2011, Waxsongs
Mikey Wax is a Long Island-born singer/songwriter who grew up on a steady diet of Billy Joel, James Taylor and Dave Matthews.  His debut album, Change Again, topped out at #46 on the iTunes Top-100 pop chart in the US, UK, Canada and Australia.  This led to tours supporting artists such as Howie Day, Serena Ryder and Ryan Cabrera.  His follow-up, a digital EP released in April, 2010 entitled The Traveler, received over 10,000 downloads and helped Wax earn 250,000 fans across Facebook, Twitter, MySpace and YouTube.  On September 20, 2011, Wax follows up with his latest full length album, Constant Motion.
Constant Motion is a collection of eleven bright and exceedingly bland pop songs that are ready for radio and licensing.  Wax hits home with the alt-edged pop of “Counting On You”, with a solid voice that falls somewhere between Rob Thomas, Jason Mraz and John Mayer.  “How It Feels” works over a fluffy dance beat, with Wax making the jump into a questionable falsetto voice.  Wax settles into his generic pop genre, comfortable and unchallenged, occasionally raising the bar a bit with songs such as “Keep Dreaming” and “Fall For You”, but Constant Motion is more about the former than the latter.  Wax’s voice isn’t inconsistent with the sort you’ll find on pop radio, but would find him struggling to get out of auditions for a show like American Idol.  There’s little doubt that Constant Emotion will sell, but it’s the sort of music that’s forgotten almost as quickly as it’s spun.
Rating: 2 Stars (Out of 5)
Learn more about Mikey Wax at www.mikeywax.com or www.myspace.com/mikeywax.  Constant Motion drops on September 20, 2011.  You can pre-order the album in various merchandise packages at www.mikeywax.com.  The album is also available digitally from Amazon.com.
Posted by Wildy at 5:00 AM