Anastasia Barzee - The Dimming Of The Day 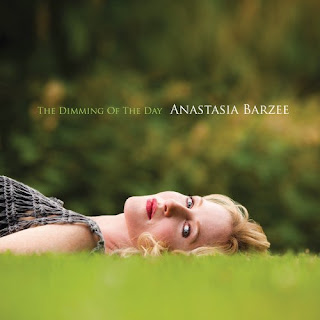 Anastasia Barzee – The Dimming Of The Day
2011, Ghostlight Records
Anastasia Barzee has made herself something of a staple, both on Broadway and the small screen.  In New York, she has starred in shows such as Henry IV Parts 1 and 2; Urinetown; Jekyll And Hyde, White Christmas and Miss Saigon.  Barzee also created the role of Josephine in the West End production of Napoleon.  Television aficionados might recognize her from a host of guest appearances on shows such as Law & Order; Law & Order SVU; White Collar, Murder She Wrote and Herman’s Head.  Barzee has even graced the silver screen, appearing in the film Fair Game opposite Sean Penn.  But it’s Barzee’s voice and stage presence that set her apart from the crowd.  In spite of that, Barzee has never released an album of her own; until now.  On September 27, 2011, Ghostlight Records releases The Dimming Of The Day, a collection of Broadway, Pop and Jazz interpreted by Barzee under the direction of Grammy-nominated producer Matt Pierson, with arrangements by Grammy Award winning Gil Goldstein.
Barzee kicks things off in high style, with an absolutely chilling rendition of Kate Bush’s “The Man With The Child In His Eyes”.  Barzee presents the song as a Broadway soliloquy, much more personal and raw than the original.  This is both positive and negative, as the earthy take seems to fit better to the song that Bush’s dreamy original, but it is also quite heavy in sound.  “Summer Me, Winter Me” has a nice, light swing feel.  Barzee’s vocal sound is a bit heavy for the light, breezy arrangement, but the net effect is still enjoyable.  Artist and arrangement meet on “Lilac Wine”, where everything clicks as if Barzee wrote the James Shelton standard herself.
Barzee shows off a bit of her upper range on “Dinner At Eight” (Rufus Wainwright), soaring in the moment.  The wider range puts more sonic perspective on the heavier alto sound she’s traded on thus far, and helps you realize just how gorgeous her sound can be.  Richard Thompson’s “The Dimming Of The Day” gets the royal treatment, with Brian D’Arcy James sitting in on the duet.  Barzee and James, who starred together in White Christmas, share a beautiful chemistry in the blending of their voices here.  Barzee takes on one of the true classics of American pop music in Paul Simon’s “American Tune”, and performs admirably in a number that’s a lot easier to lose than it might first appear.
A more recent classic, Randy Newman’s “Feels Like Home” (Randy Newman’s Faust), is full and rich, both in arrangement and Barzee’s vocal performance; one of the true highlights of the album.  Another is “Don’t Go To Strangers”, with Barzee giving live to the song’s invitation in a purely inspired vocal performance that will have you hitting replay again and again.  Barzee cruises to the close with “All I Know” (Jimmy Webb); “Terrible Things” (April Smith) and an eerily pretty rendition of “April Moon”.
There is something to be said for a performer who can sing literally anything and make you think it’s their personal genre.  Barzee can sing anything; although there are certainly some styles and sounds that she wears better than others.  Barzee gets off to something of a slow start on The Dimming Of The Day, but never looks back and ends up turning in the sort of performance you expect of a star of stage and screen.  Barzee belts, croons and coos her way through thirteen classics and prospective classics of the American Songbook on The Dimming Of The Day, surprising at turns with one quality performance after another.  Anastasia Barzee is one of a kind, and The Dimming Of The Day is not to be missed.
Rating: 4 Stars (Out of 5)
Learn more about Anastasia Barzee at www.anastasiabarzee.com.  The Dimming Of The Day drops on September 27, 2011.  The album is available for pre-order on CD at Amazon.com.