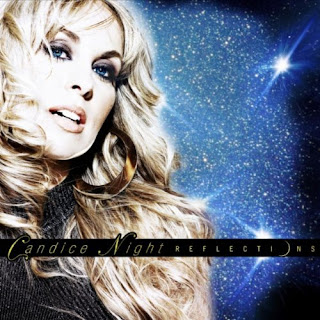 Candice Night – Reflections
2011, Minstrel Hall Music
All she asked for was an autograph.
Candice Night started out as a model.  The Hauppauge, Long Island (New York) native transitioned to radio in her twenties; seeming destined for a career in communications.  In 1989 she approached rock legend Ritchie Blackmore (Deep Purple, Rainbow) for an autograph.  It wasn’t long before she was singing backup for Deep Purple on tour.  Now married to Blackmore, Candice Night is the lead singer of Blackmore’s Night.  Candice Night is not just the beneficiary of good fortune; however, she is a serious vocalist who has also performed with the likes of Sass Jordan, Glenn Hughes and Beto Velazquez.  Night strikes out on her own this week with Reflections, a collection of ten power ether rock songs that show off her voice in fine fashion.
Night’s voice is highly trained, a fact that becomes quickly evident on the opening track, “Wind Is Calling (Hush The Wind)”.  Night mixes hard pallet sounds with a soft tone in unusual and intriguing fashion.  The melody is utterly memorable, built within a well-constructed arrangement that’s part lullaby and part fairytale.  “Gone Gone Gone” is a high-energy, vocal driven rocker with a catchy chorus.  This one could be a breakout hit with the right push and the right luck.  “Black Roses” is pretty and haunting; dark but with a sparkle of light in the middle.  Night gets ethereal on “Now And Then”, before dancing into the mid-tempo (but catchy) “Dangerous Smile”, playing on the edge of innuendo.
“For You” has a dark, indigenous feel; playing on Celtic themes drawn from deep in Aerie.  It’s a gorgeous melody that will haunt you even after the album is done.  Night coasts through “Call It Love” and “Robin Red Breast”, but rouses listeners with the baroque and Mediterranean strains of “Alone With Fate”.  Dark in tone and timbre, the song springs to life with an inner glow that’s part melody, part energy, and largely Night’s voice.  Reflections winds down with an orchestral finale in the form of “In Time”.  It’s a solid end, but somehow it doesn’t seem right to say goodbye without one last utterance from Night.
Reflections is a successful collection of songs that perhaps don’t exactly fit within the Blackmore’s Night songbook, but are perfectly fitting to Candice Night’s voice and style.  There are a couple of down moments her, but on the whole the album is entertaining and worth spending some time with.  Night does the ethereal and lyric stuff so well, but she is surprisingly good when she lifts her face into the headwinds of rock and roll and lets loose as well.  Reflections is a worthwhile trip.
Rating: 3.5 Stars (Out of 5)
Learn more about Candice Night at www.candicenight.com or www.myspace.com/candicenight.  Reflections drops today digitally, with the CD released on October 11, 2011.  The album is available from Amazon.com as a CD (as a pre-order) or Download.  The album is also available via iTunes.
Posted by Wildy at 5:00 AM