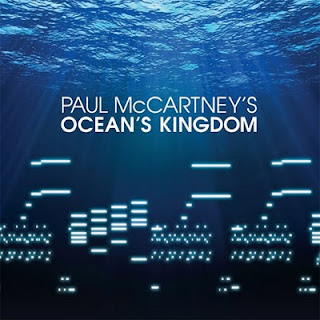 Paul McCartney – Ocean’s Kingdom
2011, 2011 MPL Communications/HEAR Music
If you are Sir Paul McCartney, you can do pretty much anything you want musically.  He’s certainly earned the right over the years, from his early work with The Beatles through a long and storied solo career (on his own and with Wings).  In recent years McCartney has turned his impressive ear to classical music with increasing success.  On September 22, 2011, McCartney’s Ocean’s Kingdom, opened with the New York City Ballet.  Written without the strictures of formal ballet style, McCartney nevertheless managed to create a viable work writing from the heart.  McCartney created an undersea world, telling a love story against the backdrop of a world threatened by human expansion and carelessness.  Ocean’s Kingdom is set for wide release on October 4, 2011.
Comprised of four movements, Ocean’s Kingdom shows an emotional and narrative breadth that is surprising.  Movement I: “Ocean’s Kingdom”, starts is muted, peaceful tunes, setting the scene of an undersea world of beauty.  McCartney uses a long, slow build in both intensity and complexity to set the stage for the struggle for life that lies at the heart of the story.  The movement rises to majestic heights before residing a bit and moving into Movement II: “Hall Of Dance”; the latter alternates between lilting, jaunty mini-movements and lyric forms full of distinctive beauty.  McCartney creates some “Wow” moments here, and seems to understand the heart of the dance better than you might expect.  The movement closes in dark, distressful tones, implying a tirade or a tragedy.
Movement III: “Imprisonment” begins, surprisingly, in contemplative, peaceful tones.  Judgment and hardship build through the use of horns into an emotional and pervasive darkness.  All the while, woodwinds try to spread the light that holds back the storm.  This juxtaposition becomes a wonderful, if understated dance; a call-and-response style between the darkness and the light that is intriguing.  McCartney builds through the movement to grand themes reminiscent of some of John Williams’ finest films core works.  Movement IV: “Moonrise” is vibrant and active; almost violent at times.  The movement begins with a grand struggle, musically, but resolves in theatrical style, with the herald of trumpets.  The celebration grows to full orchestra, bringing out various voices in the process.
Paul McCartney really can do anything, Sir or not.  If anyone questioned the validity of McCartney’s BRIT Award for Classical Album for 2006’s Ecce Cor Meum (Behold My Heart)”, the jury is in.  It was not a fluke.  Ocean’s Kingdom is quite literally, worthy of a world premiere with the New York City Ballet.  Whether or not you buy into the environmentalist apocalyptica that seems to be prevalent in pop culture these days, it is an impressive work that is artfully crafted.  A succinct and well told story invested with deep emotion, and a melodic enterprise that perhaps only McCartney himself could craft.  This is the real deal.
Rating: 4 Stars (Out of 5)
Learn more about Paul McCartney at www.paulmccartney.com.  Ocean’s Kingdom drops on October 4, 2011.  The album is available for pre-order from Amazon.com as a CD, on Vinyl or as a Download.  The New York City Ballet will perform Ocean's Kindgom again on September 29, 2011, and again for five dates in January of 2012.  Ticket information is available here.
Posted by Wildy at 7:25 AM

He never ceases to amaze me. Unbelievable! I'm hoping there's a rock-pop album sometime in the near future. He and Dylan have really been having great runs lately. Thanks for the review of that one. I know most people will overlook it, but Macca's just a jaw-dropping talent...