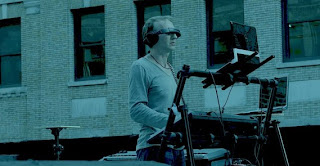 Lanes – Disengaged 2013 (live set)
2013, Andrei Lanes
Andrei Lanes is a Brooklyn-based EDM musician who has played live sets in and around Williamsburg.  With an expanded live set coming for shows this fall, Lanes is building a library of unique and lively original EDM compositions.  The tracks reviewed here are not officially released, and Lanes has no plans for formal album releases, preferring the give and take atmosphere of the stage.
“Hysterical Sobriety” is driven by a killer beat and ethereal counter melody.  Lanes structures this around a series of riffs that are certainly dance worthy, and this tune has its own gravity that is difficult to escape.    Lanes makes an effort to explore the theme he’s concocted here, making “Hysterical Sobriety” more involved than your typical EDM track.  “Noctilucent”, inspired by Liz Nielsen’s “Egg Galaxy”, once again blends the ethereal with the primal.  The net effect this time around is more subdued, but Lanes manages a mellow groove.  With “Disengaged”, Lanes moves into more surreal territory, bringing Eastern sounds into the ether over a double-timed clockwork rhythm.  The result is infectious and driven, but with a measured feel that is not urgent, yet feels inevitable.  “East Coast” captures the frenetic pace of New York City’s West Side Highway, or perhaps any stretch of open road on the I-95 corridor.  The construction is coherent, but Lanes suggests between the lines that chaos is never more that a hair’s breadth away.  “RTT” has an incessant feel, like the onrushing of time in an urban landscape, where nothing changes but everything is always moving, circling, building…  Lanes constructs primary in 4/4 time here, but manages to build a techno/musical march that will get under your skin.
Lanes surprises and captivates with an unusually lively set of electronic compositions in his Disengaged 2013 live set.  Ethereal themes and energetic compositions are the rule of the day here, with Lanes showing no fear as a composer.  His tracks delve deep into thematic exploration without ever losing their EDM credentials.  If all EDM music were this original and energetic it could go main stream.
Rating: 4 Stars (Out of 5)
Learn more at www.lanespro.com.