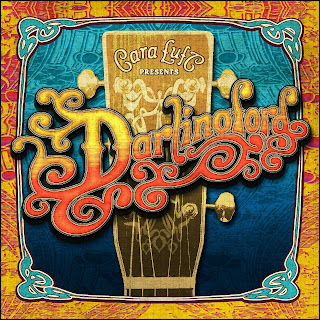 Cara Luft – Darlingford
2012, Fontana North/Blue Case Tunes
Cara Luft began performing at the age of four, singing and accompanying herself on dulcimer.  By the age of eleven the Calgary native teaching herself guitar, learning alternate tunings and various picking techniques.  Luft soon added banjo to her repertoire, giving her a solid arsenal of instruments to back up her strong and distinctive alto voice. A founding member of The Wailin’ Jennies, Luft has also cut an impressive swath as a solo artist.  Luft came to our attention here at Wildy’s World with her 2007 album, The Light Fantastic, a 4 ½ star gem that still ranks as a personal favorite.  Luft returned in 2012 with her third solo album, a splendiferous mix of folk, Celtic, country and even shades of pop music that is ever so much more than anything she’s done before.

Darlingford begins with a look at salvation in the form of "Only Love Can Save Me", a splendid mix of country and folk sounds that wrap around Luft's singular voice like a blanket. The song is uplifting and joyful, yet full of a stylistic and compositional complexity that is musically satisfying. "Bye Bye Love" is an emotionally and musically mature post-mortem on a relationship lost. Absent the vitriol common in pop/country kiss off songs, Luft makes a much more damning case for moving on by speaking straight from the heart. This is a beautiful examination of love's detritus, complete with gorgeous vocal harmonies that appear from nowhere to accent some of her more poignant discoveries.  Luft's cover of Mike Scott's is powerful to say the least. The melancholy hope of the song grows into a powerful determination that will have you on the edge of your seat. Delving back into the healing process, Luft delivers the powerful slow epiphany of "House On Fire". This testament to the permanence of loss and the healing power of friendship is unforgettable, feeling both decidedly intimate and universal at the same time.

"The Ploughboy And The Cockney" is an interesting diversion that is more than it first appears. The musical performance here is top notch, of course, but Luft proves her talent as a story teller with a light yet knowing vocal touch. Listeners can decide whether there is more to the story in light of the full cycle of songs presented here. "Idaho" is an exploration of new beginnings, new faith and new perspectives. The joyous feel of the song has an almost Paul Simon sound but with definite country flair. Luft is able to rock out a bit here in the midst of a recovery she never foresaw.

Genocide and social responsibility whirl around the story of a man whose heroics are sometimes deemed a failure. "Dallaire" explores the perspective of Lt. General Romeo Dallaire, who oversaw international forces in Rwanda in 1993 and 1994, at the height of the genocide campaign of Hutu extremists. This is a touching and poignant look at how we struggle to do the right thing, often failing even as we succeed. Luft returns to her personal milieu with "Off My Mind". Here we hear some of the anger one might expect post breakup, but the quiet reserve of class that Luft clarifies it all with is refreshing. It doesn't dull the lyrical daggers she throws, but it does make them harder to deflect.

"Portland Town" explores the ravages of war from the perspective of a mother who sees her three sons go off to battle, never to return. The dark Celtic style arrangement gives the song a quiet urgency that matches perfectly to the subject matter, and Luft's voice is fully in the moment with an urgent grace. Luft moves on to reverse prepositions and propositions with her emotive and stunning take on "He Moved Through The Fair". Her voice conveys a story of love with an elemental power that is breathtaking.

Luft takes a somewhat lighter tone on "My Darling One", an incantation to a beloved child or perhaps even to a prospective love. The bouncy feel of this tune marks an emotional turning point, as the scars of loss begin to fall away. That inertia grows on "It's Gonna Be Alright", as faith turns to confidence and ambition to make tomorrow a better day. Darlingford closes out with "Charged!” - a bonus track born of a real life border bust. The song is a fun and entertaining reminder of how quickly things can go awry in the hands of Federal power, and how we rely on the humanity of one another to straighten out the simple-minded grind of political machines.
It might seem a cliché phrase, but Cara Luft weaves magic through every nook and cranny of Darlingford.  In the process she turns a bit of personal tragedy into songwriting gold, exploring themes of love, loss, faith, recovery and choosing a new direction with lyrical aplomb and a near-perfect understanding of musical setting, mood and composition.  Luft’s ability to tell a story through song has never been more in focus than it is on Darlingford, and it wouldn’t be hard to imagine Luft collecting her second Juno Award based on this effort.  Darlingford is easily one of the finest collections to cross this desk in 2012, and can be nothing less than a Wildy’s World Certified Desert Island Disc.