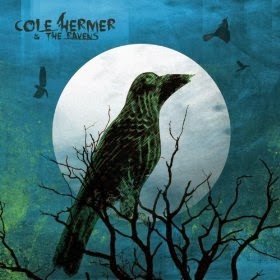 Cole Hermer is an 18 year old senior in high school.  In spite of that he might be one of the most convincing young heavy rock vocalists you’ve heard in some time.  With influences ranging from Axl Rose, Kurt Cobain and Layne Staley to Neil Young and The Black Keys, Hermer is able to surprise you at almost every turn.  Hermer’s songwriting is surprisingly supple for his age, reflecting the disaffection of modern youth as well as the pure joy of rock and roll.   After a number of years with bands such as Ultimate Concussion and Anathemas Blessing, Cole Hermer steps out into the limelight with his debut EP as Cole Hermer and The Ravens; a self-titled set alternatively titled Quoth the Raven.

Hermer plays homage to 1980’s heavy rock with “California Breakdown”, instantly inspiring thoughts of bands such as Poison, Guns and Roses and Cinderella, ripping up thoroughly vibrant and powerful sound in the process.  If someone had put out a song like this twenty years ago and it would be a chart-hogging monster.  “Exploitable” is cut from similar cloth, but with a darker, alternative edge.  This is radio for radio right now, and Hermer’s retro metal vocal style just raises the intrigue.  “Friends” is a different breed of song altogether.  Here Hermer is showing a softer, more pop oriented side while lamenting the rejection of ‘let’s just be friends’. “Maybe” is a melancholy, acoustic-guitar driven ballad with a distinct navel-gaze mentality. It’s a solid piece of songwriting that’s good romantic movie soundtrack material.  Hermer gets back into upbeat territory with “Teenage Creed”, a driven mid-tempo rocker with attitude and a memorable chorus.  The pacing here is a bit uneven, but Hermer is on to something here; the song gains intrigue as it bulls to its conclusion.

Cole Hermer and the Ravens offer up an interesting musical study with their self-titled EP.  Hermer refuses to be pigeonholed as a hard rock/heavy metal vocalist in spite of his rough edged sound.  What’s most surprising is how capably he handles the softer material. Everything on the EP is well-written and well-performed, although the pacing at times is a bit off.  This is a great start.  Cole Hermer seems to have what it takes to be a big time front man.  I am not sure if the current trade winds of popular music are in his favor, but with the right break Cole Hermer and The Ravens could be huge.

Learn more at www.colehermer.ca.
Posted by Wildy at 7:00 AM