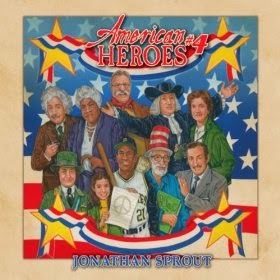 Jonathan Sprout is a mission musician, if you will.  A songwriter and performer since the early 1970’s, Sprout was inspired in 1994 to begin writing about heroes after seeing a poll of youth that listed heroes such as Bart Simpson and sports figures whose off the field exploits were less than heroic.  Since then, Sprout has released four albums encompassing heroes from all walks of life.  His third American Heroes album, released in 2010, won 11 national awards and was nominated for a GRAMMY Award.  Sprout returns in 2014 with his fourth installment in the series, American Heroes #4.

Sprout certainly believes in his material.  There is a heartfelt joy that runs throughout American Heroes #4, telling the listener that Sprout truly loves his material.  The material itself is well-crafted, with sometimes hokey electronic-based arrangements.  Sprout kicks off with “Unstoppable”, a tribute to Juliette Gordon Low, one of the founders of the Girl Scouts.    The song is full of admiration communicated in repetitive and somewhat banal lyrics.  The arrangement is bouncy but ultimately bland.  This is a situation where intent and heart carry the day.  “Come With Me!” is a bubblegum pop ode to the early Dutch settlers of the Western World.  “E=MC2” is about Albert Einstein that is an inartistic as it is full of awe.   Sprout takes to the Caribbean for a tribute to Pirates’ slugger Roberto Clemente in “Hall Of Fame”.    This is more an ode to Clemente’s relief efforts than his baseball skills, and is crafted in an awkward yet effective fashion.

“Man In The Arena” encourages kids to give their best to whatever they do, and not worry about what the crowd says.  It’s a positive pop song with a great message.  “Through The Eyes of a Child” finds Sprout crossing over into the world of ballads in an ode to Walt Disney.  The arrangement is a bit on the bland style, but the sentiment seems heartfelt enough here.  “Powerful” riffs on an innocent letter written by Samantha Reed Smith to Yuri Andropov during the Cold War that led to Smith being called America’s Youngest Ambassador.  The song plays on the theme of the power of children (and little girls in particular).  The activist message here aimed at children is a feel good theme that tries to take the exception and make it the world.

“Dr. Seuss” is a playful ode to Theodor Geisel that sounds like something from the old Dr. Demento Show.  Sprout uses an impeded voice to essentially list all of Seuss’s characters rather than say much about the man who created them.  It’s entertaining fluff.  “Interconnected” is a meandering, collectivist ballad espousing Rachel Carson’s environmental efforts.  Sprout relies on cliché imagery to pay tribute to someone who relied on none of these to forward her cause.  Sprout turns it around on the listeners and reminds then that they can be heroes with "Heads, Hearts and Hands". He takes it one step further on "I See A Hero", falling into adulation and ego enhancement.  This is one of the nicer arrangements on the album, and one of the better listens as well.

Sprout works the crowd with simplistic musical portraits aimed at installing a sense of social right and wrong in his listeners. The center/left ideological focus of the songs will turn off a portion of his potential fan base, but Sprout keeps his common core approach fairly low key. One gets the impression that Sprout is reaching a bit with this fourth installment in his American Heroes series; the lyrics are a stretch at times and the arrangements often have a canned feel. But there's little doubt that the folks who have enjoyed the first three installments will love American Heroes #4.