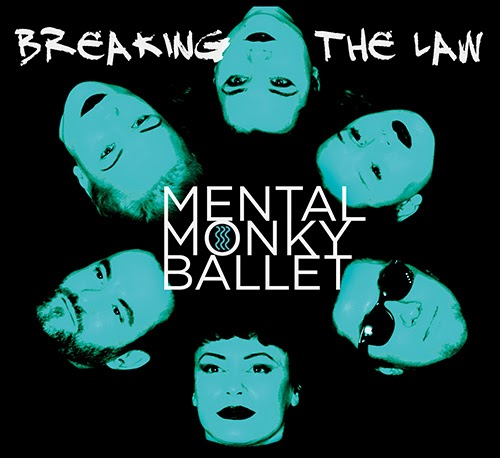 Swedish rockers Mental Monkey Ballet are driven by the combination of songwriter/producer Jan Fretman and singer/songwriter/producer Vivi Lundstrom.    Their mix of tribal dance and post-punk/garage sounds is unique and opens up a host of creative possibilities.  Lundstrom and Fretman are joined by Anna Wennesten (keys/backing vox); Nino Prekratic (guitars);Hakan Englund (drums); Maxa Fron Pashayeva (bass); and Linnea Simon (backing vox).  Mental Monkey Ballet’s debut EP, Breaking The Law, will be released in the early part of 2014.

Breaking The Law launches on the esoteric sound of “Into The Open”, with lead vocalist Vivi Lundstrom sounding like a wayward cross between Dolores O’Riordan and Chrissie Hynde.  Full of energy and a pending sense of chaos, “Into The Open” is an announcement, a dropping of the musical gauntlet, if you will that announces Mental Monkey Ballet to the world.  “Club 27” is an edgy alt-rocker built around a serious pop hook.  Mental Monkey Ballet falls prey to the song’s sense of repetition a bit, but this tune has the potential to cross the rock/pop/dance divide. “Different” is a forlorn ballad that matches sonic and lyric sensibilities.  The arrangement is well crafted, but the pacing is tough and the track simply lasts too long.  Lundstrom’s voice is impeccable, but even she seems to falter under the weight of the material.

“Chemical” is similarly weighted.  Mental Monkey Ballet seems to explore the various ways people try to find a higher mind, whether through drugs or religion.  This turns into a tired and drawn out piece that’s more naval gaze than anything else.  The energy level here is proof.  There’s sort of a messy monotony to “Breaking The Law”, as if Mental Monkey Ballet is trying to blend a messy, almost garage-like feel onto what is essentially a dance tune.  “You’re More Trouble Than You’re Worth” is a classic kiss-off song with a killer back-beat.  Mental Monkey Ballet are thoroughly in their element here, and Vivi Lundstrom shines.  Breaking The Law winds down with the “Get Around This”, a ballad about trying to move on.   The song is deeply melancholy, with the energy to match.

Mental Monkey Ballet wends their way through the seven songs on Breaking The Law with an almost lackluster feel at times.  There are some very bright moments here, and it’s clear to see that the band has the potential to be a major player on the international music scene.  Vivi Lundstrom has a classic alt-rock front-woman’s voice.  Unfortunately, Mental Monkey Ballet spends much of the EP wallowing in low-energy, low yield arrangements.  When Mental Monkey Ballet breaks out of their torpor, you’ll be glad you’re along for the ride.

Learn more at www.mentalmonkeyballet.com.
Posted by Wildy at 6:58 AM