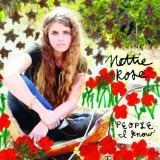 You might say that Santa Monica native Nettie Rose has music in her blood.  She is the granddaughter of Alan Freed, the DJ who coined the phrase “rock-n-roll”.  Her father is a music publisher and her mother is a rock archivist.  Nettie Rose grew up with the music business as a second nature to her, and fell in love with some of the more esoteric songwriters of the past 30 years.  Honing her craft in a boarding school band, and later on her own, Nettie Rose is on the path to becoming one of the songwriters she so idolized as a child.  Her debut album, People I Know, is a series of vignettes on people real and imagined from all across the spectrum.

The grasp of humanity Rose shows on People I Know is striking in one so young.  Granted, she falls into cliché on occasion where experience has yet to open doors for her, but even here Rose puts a human face on the caricature and brings the character to life. All of this is delivered in an ever-evolving mélange of rock, country, folk and blues that occasionally ventures in European styles.  Nettie Rose’s voice is utilitarian and striking; not pretty but perfectly honed for the songs she writes.  She sets off on the right foot with “Ride Ride Ride”, a classic-style story song that plays to Rose’s strengths of lyrical and musical constructs.  “For My Young Lord Drake” has a plaintive, mesmerizing inertia.  It’s one of the crown jewels of the album, and Nettie Rose delivers it with a no-nonsense style that works very well.

“Last Chance Saloon” shows Rose’s ability as a composer as she crafts a wondrous atmosphere around a simple story song.  The high point of the affair comes on “The Puppet Cabaret”.  Rose is entirely in her element vocally, and you will walk away humming/singing this to yourself.  “Corduroy Marina” wins the award for the best use of the world “misanthropic” in a popular tune.  There’s an almost novelty-like feel to the lyrics here, but Rose’s straight-forward songwriting makes this feel like art rather than novelty.  Nettie Rose closes with a double track.  “Mean Manblues” is a solid closing number, and is followed by an untitled hidden track.  This last is a gem, although Rose almost seems to run out of air on a couple of the longer vocal lines.

Nettie Rose delves into the singer/songwriter tradition with aplomb on People I Know.  Her effort is not wasted, although it’s clear that Rose is still finding her niche.  The album is a very strong first effort.  With continued development of her craft, Nettie Rose is on the path to one day be the sort of singer/songwriter that other burgeoning artists hope to be like.

Learn more at www.nettierose.com.
Posted by Wildy at 7:36 AM