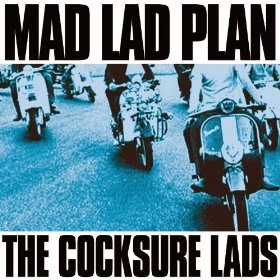 Somewhere between myth and music lies the sordid tale of The Cocksure Lads.  The Cocksure Lads inhabited the same space in time as The Beatles, Herman’s Hermits and Gerry and The Pacemakers, pumping out hits on BBC Radio One, but have somehow been forgotten by history.  Or, they are the creation of Moxy Fruvous alums Murray Foster and Mike Ford.  Purveyors of the latter theory suggest that Foster and Ford began writing songs in the 1960’s Brit-Pop style back in the mid-1990 and have continued off and on ever since.  By 2010 they had over 25 Lads songs, and decided to commit them to bits and bytes.  A year later they decided to make a video, but came away the conviction that there was a larger story to be told about The Cocksure Lads, and hence a movie was born.  Shooting on the film begins in 2014, but in the meantime, The Cocksure Lads are back with a brilliant collection of 13 songs entitled Mad Lad Plan.

The Lads kick things off with the bouncy 60's pop sound of "In London Town". You'll be humming this one for days or at least until you hear the Beatles-esque follow-up track "Mr. Man". The Cocksure Lads take on the major labels here in a bit of joyous disbelief. The joyous/campy spirit continues on "They All Wanted Me Back", with a melody that Paul McCartney would envy. Expect to move your feet even if you don't want to.

"Yes I Do" is the sort of swaying, melodic love song that recalls 1960's high school dances, and transitions into the melodic brilliance and happy outlook of "Not Today".  You won't be able to keep yourself from swaying to this tune, which might have knocked The Beatles off the charts if it were released in 1964.   "Say Uncle (Garant Said)" is a frenetic rocker detailing advice from a friend/colleague that runs from sage to ridiculous, all while speeding like a freight train hopped up on delicious guitar licks. Te narrative here is fun; you'll be swept along. The Cocksure Lads change things up with the swaying ballad "When You Walk", a somehow sad sounding yet sugary love song that will get stuck in your grille. "Paddington Way" has a dark musical timbre, but still manages to maintain a distinct pop sense with a chorus that won't let you go.

One of the quiet gems of the album is "The Surprising Thing". The Lads never quite get around to telling you what it is, but one can imagine it might be falling in love. This is pure Brit Pop gold. "Easy Peasy" has a more elemental rock and roll feel, but shares the same universally approachable motif. Sit still if you can, because this song is going to rock you. "Requiem For A Lad (featuring The Woosleywumps)" is a contemplative swayer where the melody line is whistled.  The simple arrangement and melody are memorable, and have an almost haunting quality.

The Cocksure Lads pay tribute to their stories homeland in "England My England", a schmaltzy yet moving ode of fealty full of quiet nationalistic pride. The Lads close with the light hearted ballad "Our Love Is Strong", a song guaranteed to have you dancing around and singing along. The lyrics are campy and fun, if a bit off the beaten path of songs of this sort. Nevertheless, you won’t be able to get the song out of your head.

Whichever story you might believe about The Cocksure Lads, one thing is for certain:  The Lads rock play vibrant 1960’s rock and roll with a distinct musicality that stands up against the best of that era.  Mad Lad Plan is an utter musical joy that will have you coming back again and again; a true Wildy’s World Certified Desert Island Disc.

Learn more at www.thecocksurelads.com.
Also! Be sure to check out the first video from the new album: "Mr. Man".