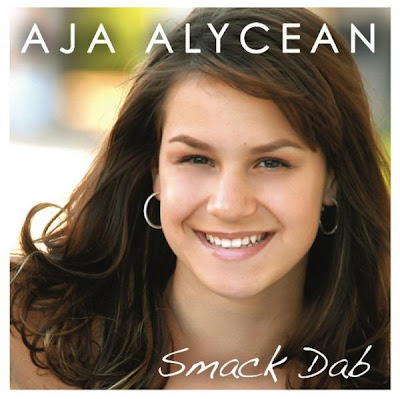 San Diego's Aja Alycean has already hit more milestones in her musical career than many performers twice her age. The fourteen year old Alycean has already sung the National Anthem at a San Diego Padres game, opened for David Archuleta, sung with Billy Ray Cyrus and appeared (briefly) in a Lifetime Network movie. Alycean has a voice that is still developing and yet is already radio quality with a polished country sound. Her band is top notch, and her songwriting is advanced beyond her years. All of this is self-evident on Alycean's debut EP, Smack Dab.
Alycean leads off with the title track, a Country/Blues/Rock hybrid that deserves wide exposure. Alycean captures a near-perfect Pop/Country moment in Smack Dab with a highly memorable hook and an arrangement that is bound to inspire dancing. Is Your Big Brother Home? is a cute Pop/Country tune that is perfect for the Radio Disney set; a crush song that's very pointed while retaining a sense of innocence that is refreshing. Looks Like My Heart finds Alycean belting out a heartfelt ballad that's young in content but mature in delivery. This is another tune with real commercial potential. Alycean covers the prerequisite country song of heartbreak on What He Said, turning the tables on the two-timing fella who inspired it. Once again, the subject matter is a bit on the young side, but Alycean's delivery is so polished and honest it won't matter. Smack Dab closes with Fly Away, a catchy Pop gem with real commercial potential.

Aja Alycean has a voice and presentation that will take her a long way, but the songwriting on Smack Dab is top quality even if you don't consider her age. How this EP hasn't gotten the attention of some big music executive thus far is beyond me, and yet I am also grateful for that as a fan. Aja Alycean is a rare and precocious talent, and the music she's making is honest and authentic, not pre-packaged schlock like what you hear from most of the major label adolescents who litter up the pop charts. Smack Dab is a refreshing introduction from a young artist who appears to be on a can't miss path. I just hope she keeps her own voice and style and doesn't allow some producer down the road to convince her to be someone she's not. There are a lot of people out there who would respond to real, honest Pop/Country like what Aja Alycean is creating. Check her out.

You can learn more about Aja Alycean at http://www.ajaalycean.com/ or www.myspace.com/ajaalycean. You can purchase a copy of Smack Dab as either a CD or Download from CDBaby.com.
Posted by Wildy at 5:18 AM