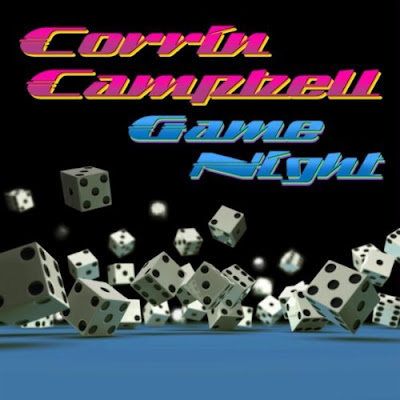 Corrin Campbell and her band The Election have taken Baltimore by storm. Compared to bands such as Evanescence, Heart and Paramore, Campbell and band have developed a reputation for high energy shows. Aside from being an amazing vocalist and vicious bass player, Corrin Campbell is also a combat veteran of the 1st Calvary Division based out of Ft. Hood, Texas. Campbell’s second album, Game Night, attempts to present that energy level in conjunction with Campbell’s big, beautiful voice.

It's always a good sign when a CD gets your toes tapping right from the opening notes. Campbell opens Game Night in just this fashion with Find Your Way, a reserved, guitar-driven rocker built on a wonderful Pop hook. Campbell has a wonderful, strong Rock voice, filling in the sonic aura of the song with her rich, powerful alto. Campbell shows her lyric, vulnerable side on Time To Let Go, a freedom song that breaks out into a highly melodic rock arrangement that's highly enjoyable. Done With You is a kiss-off song that seems to lack the courage of its convictions. The lyrics suggest a finality born of anger or at the very least frustration, but none of that comes through in the relatively mild vocal line. Musically the song is great, there's just a disconnect between the words and the emotion as presented.

Campbell stays a bit reserved on Remember Me, but its such a great melody that theatrics aren't required, and the rhythmic guitar work helps to drive the song. Colors Of You finds Campbell engaging in a 1980's inspired Pop/Rock sound in a mildly catchy tune that could well be an incidental soundtrack piece. Campbell goes for mellow balladry on Apologize, a keyboard-led heartbreaker that turns power ballad after the first chorus. Campbell is smooth and not without energy here, but once again there is something of a disconnect between the angst and energy of song and singer. Campbell opens Sunbeam with a guitar riff that with some more distortion and insistence would make AC/DC proud. Campbell also answers the bell vocally here, revving up her performance to match the tension in the song. This is the best overall track on the disc because everything clicks, and Campbell sounds like a superstar.

The energy stays high on Blink Of An Eye, and a little bit of attitude finds its way into the music. From a Pop/Rock radio perspective this is the most likely single on the album. Keep Movin' is another fine Pop/Rock amalgamation, carrying an infectious energy that's sure to make it a concert favorite. Cast It Off stays firmly in the Pop/Rock realm, although the edge is gone from this track, which sounds more like a pure Pop song. Campbell says goodnight with A New Page, a gorgeous piano-driven ballad where Campbell lets her hair down and sings her heart out. This song could be a true hit.

Corrin Campbell has a great voice, but she spends much of Game Night mismatching her energy level to that implied by the songs themselves. By the final third of the album everything is working in synch, and musically the whole album is a fine product. The dichotomy between vocal energy and inner tension in the songs can be a bit distracting, but the rest of the package is so well done you can overlook it. In the end, Game Night feels like an album where Campbell and her band weren’t entirely sure what they were after at first, but at some point in the process everything started to click.
Rating: 3.5 Stars (Out of 5)

You can learn more about Corrin Campbell at http://www.corrincampbell.com/ or www.myspace.com/corrincampbell. You can purchase Game Night as either a CD or Download in Campbell’s Web Store.
Posted by Wildy at 5:10 AM