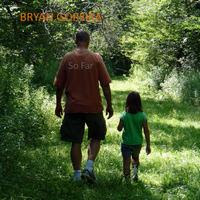 Biologist and songwriter Bryan Gorsira is back. Last year we reviewed his album The Best Years, finding his songwriting quite memorable and some of the talent he’d attracted to work with him formidable. Now Gorsira is back with another collection of songs entitled So Far. The album sits right in the middle of the singer/songwriter aesthetic.

So Far opens with Searching, a contemplative, vaguely melancholy song about fruitless searches with a sweet, gentle melody and a deep poetic sense. Searching is a powerful opening song that clamors for attention with subtle grace. Gorsira scores big points with Give Me A Day, a song that might have been right at home in the late-60's/early 70's singer/songwriter era. The harmonies here recall Crosby Stills & Nash, and the songwriting in general is superb. Gorsira's Caught, sung here exquisitely by Dana Cooper is the tale of someone who knows their love is likely to have no good end but has surrendered to it nonetheless. There is a passing resemblance to Stairway To Heaven here that kept presenting itself, but it’s an incidental resemblance that might almost be ironic.

The Best Years is the strongest entry on So Far, a Country-flavored love song written husband-to-wife about the times go by and the happiness they've brought. This is a major Mix Tape candidate for a slightly more mature set of listeners and is very well written. Something Right is a gentle, happy moment from a man surveying his life and finding that all is as he'd have it. Gorsira and band meander through Again and StepChild before finishing up with Ramble, which owes a bit of its musical lineage to Kansas' Dust In The Wind.

Gorsira is a more than competent songwriter. The pacing of So Far drags a bit over the last third or so of the album, but it is a strong effort with a few songs that might garner him real attention as a songwriter. There are some striking similarities between a couple of Gorsira's songs and classic rock tunes here, but the differences are enough to at most claim "inspiration". So Far is another decent effort from Bryan Gorsira.

You can learn more about Bryan Gorsira at http://www.bgorsira.com/ or www.myspace.com/bryangorsira. You can purchase a copy of So Far as either a CD or Download from CDBaby.com.
Posted by Wildy at 6:18 AM