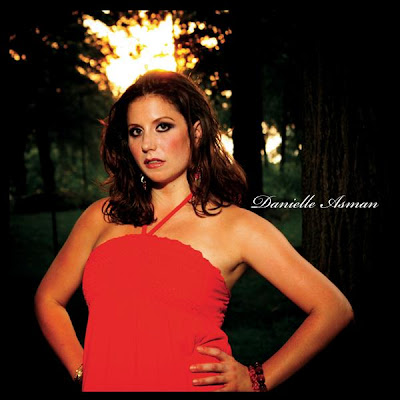 New York City’s Danielle Asman is an interesting introduction; akin to finding a diamond in a mine. You know there's something in there, but it's unclear yet whether Asman will be an ordinary or extraordinary diamond. Her debut EP is a mixed affair that features some really exciting moments as well as some disturbing trends. The big down side that I see are pitch issues that show up in the final recording. Pitch issues, of course, are fixable -- it's a matter of simple breath control, but it's always disheartening to see a professionally produced EP held to less than professional standards. From a writing perspective Asman's style is a little young particularly on the lyrics side; this also can change over time. What Asman has going for her is a distinctive Pop voice combining power, tone and just a touch of that brassy belter sound. Asman opens with Last Night's Mess, a fairly standard Pop/Rock number that could easily slide over to the Country side (where it would be a more likely hit than on the Pop side). Can't Let You Go is a mournful ballad about the end of a relationship that inexplicably incorporates a rapper to shadow the chorus. This is just such an "out of left field" move based on the song that it's jarring. Asman is a bit brassy on top, losing pitch at times and perhaps over-singing in the process. The song itself isn't bad aside from the issues mentioned. Given The Orders is a soliloquy from an aspiring artist who is waiting tables until the big break comes; it's a bit cliché in approach and awkward lyrically but sweet at its core. Asman closes with You Opened My Eyes, a song about falling in love over a bottle of scotch and how a single moment can change your perspective on the world. Once again, a sweet song at base, but awkward and young, particularly so given the subject matter.

Danielle Asman has potential. There's a voice there that's distinctive. The pitch issues noted can be worked through, and the music has a decent sense of melody. What Asman ultimately might benefit from is someone to write with; a complement and a foil. With the right collaborator I think you'd see a quick blossom as its evident Asman has a lot to say. Danielle Asman isn't a world shaking start, but there are seeds here that if tended properly, might grow into something greater down the line.

You can learn more about Danielle Asman at www.myspace.com/danielleasman. You can download Danielle Asman’s self-titled EP from iTunes.
Posted by Wildy at 5:00 AM