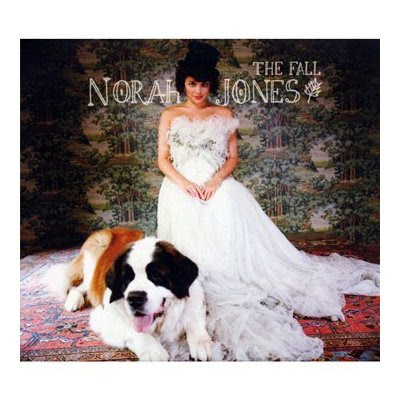 Norah Jones is back with her latest effort, The Fall. The album has been hailed as a departure for Jones from her usual smooth sound, but they may be more sound and fury than reality. The Fall does find Jones with a bit more edge to her than in the past, but it's not so much a departure as a progression in sound. The smooth feel and gorgeous melodies that have always driven Jones' music are still there, but there's a more worldly sense about the artist that comes through.
The Fall opens with Chasing Pirates, a mildly funky tune Pop tune that announces a new, more complex sound from the mistress of smooth Jazz/Pop. Jones delivers this sound with the same cool, sultry voice she introduced the world to on Come Away With Me, but with a bit more texture and outward energy than in the past. Light As A Feather has a slightly edgy sound hidden beneath the surface, but plays as a potential single. It's one of the more intriguing songs on the album, playing in a slightly darker light than we've come to expect from Jones. Young Blood is a catchy-yet-mellow tune that will make you think a bit. Jones is charming in her sense of urgency here, mining a different set of emotions than in the past.

I Wouldn't Need You is an in-your-face love song; a Mix-Tape tune that leaves little to imagination. It offers enough of what we might consider classic Norah Jones to appeal to long-time fans but enough of the new spunk to widen her face base prodigiously. Jones stays with her mellow appeal on Waiting, a stark and beautiful melody built on the classic image of the one who keeps the lights lit for the one out there on the road. Jones goes for broke on It's Gonna Be, the edgiest rocker on the album. We're still talking a fairly mellow sound, but the energy and urgency in It's Gonna Be are unprecedented on a Jones album. This is a potential chart hit, although it's more likely to show up in a soundtrack somewhere due to the putrid state of Pop radio.

Jones goes a bit off the beaten track to create one of the best love songs of the year in You've Ruined Me. The message sounds a bit negative on first brush, but the more you listen you realize that this state of ruination is all about the sort of love that leaves us powerless. The melody is gorgeous and the arrangement in general is unforgettable. December finds Jones at her most basic place as a singer/songwriter, reminding us that despite the branching out of sound she can still draw us in the a near-lullaby wrapped around a simple, gorgeous melody with her dulcet voice. Tell Yer Mama brings in a hint of country flavor on perhaps her best vocal performance on the album. Tell Yer Mama certainly carries a bit of attitude with it, almost a sort of grit, if you can imagine it. Jones closes out with Man Of The Hour, a love song written to a (Wo-)Man's best friend. It's a comical turn but sung with such commitment you might be fooled at first.

And of course, if you're lucky enough to score The Deluxe Edition from Target, you get a bonus disc called Live At The Bottom Line, a 6-song EP that's very much worth forking over the extra $3. Jones opens the set with It's Gonna Be, a delicious tune full of more than a little attitude that shows off her piano playing, her voice, and Jones' crack band. The live version certainly illuminates the song in a way that the album version does not. The same can be said for Waiting, which has a much more raw, needful feel than the studio cut. You've Ruined Me likewise comes alive on stage, although the gap between here and the studio isn't nearly as wide. Jones' cover of Wilco's Jesus Etc. is definitely worth hearing, as is her cover of The Kinks' Strangers, but it's the cover of Johnny Cash's Cry, Cry, Cry that will have you trying to track this edition down. Jones wades in like she was born to sing country music, bringing a soulful element to the song that The Man In Black himself would have appreciated.

Norah Jones has a stack of Grammy Awards, Gold and Platinum Record Awards and millions in both album and ticket sales, but she may have offered up her finest work to date on The Fall. The sound isn't such a big jump from where Jones started, reflecting more of a development of sound as an artist than a departure. The songwriting is subtle, occasionally lush and always en Pointe. Jones herself has an easy style that will surprise you, and as the bonus EP shows she's a killer on stage. Make sure you check out The Fall, even if you're not a huge fan of her past work. And try to track down the Deluxe Edition if you can; this is one of those times when that bonus disc is essential.

You can learn more about Norah Jones at http://www.norahjones.com/ or www.myspace.com/norahjones. You can purchase The Fall from Amazon.com as either a CD or Download. If you want the Deluxe edition with the Live At The Living Room CD, you can order it here.
Posted by Wildy at 5:10 AM