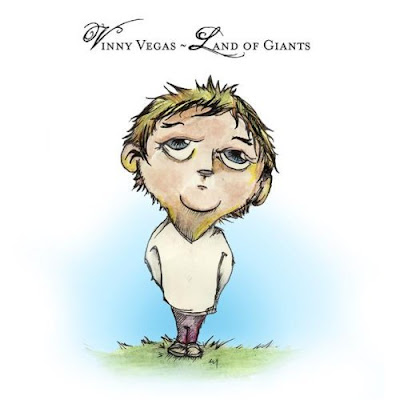 Vinny Vegas is a Baltimore quintet with a penchant for highly crafted Pop/Rock songs. Together for three years now, Vinny Vegas started out as a solo project but took on a mind of its own as various members came aboard. Vinny Vegas is currently touring on the strength of their second release, an EP entitled Land Of Giants.

Land Of Giants opens with Channels, a meandering pop tune that starts out with good energy but seems to get a bit lost halfway through. We'll Call It Atlantis follows a similar path. The song itself borders on intriguing, but there's nothing really in the sound to grab hold of a listener and carry them along. The Four Rabbits raised my interest level a bit, a five-and-a-half minute epic with Progressive Rock roots. The energy level here is higher than on the first two songs. Watch Out For Mastodons wants to intrigue with unpredictable rhythm and time changes, but the directionless approach to the songwriting creates a difficult listening experience. Vinny Vegas drives things home with Mallets, completing a song cycle that's big on ambition but lacks the courage of its convictions.

Vinny Vegas shows decent collective musical chops on Land Of Giants, but somewhere between writing, performing and recording/production something just didn't work. The recording sounds a bit one-dimensional and flat, as if the energy has been sapped from the finished product. Whether this is truly reflective of the band or just a case where the band's personality just didn't come through on the recording I can not say, but Land Of Giants just comes off bland.

You can learn more about Vinny Vegas at www.myspace.com/vinnyvegas. Land Of Giants is available for download via Amazon.com.
Posted by Wildy at 5:20 AM