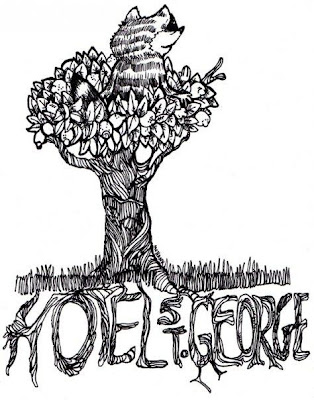 Hotel St. George was born out of an unfortunate accident at a 2007 Thanksgiving party involving a Wurlitzer piano and a glass of red wine. The piano survived, and Hotel St. George has positively thrived. In two short years the band has been nominated for two San Diego Music Awards, won a SPIN Magazine song contest, had a song placed in the videogame MLB 2K10 and been tapped to have their music featured in the upcoming season of MTV's The City. Not a bad result from the accidental introduction of tannins to ivory neither is Hotel St. George's third album, City Boy Lemon, released digitally and on an extremely limited vinyl run (500) in 2009.

City Boy Lemon opens with Simple Man, which sounds like the children of The Kinks and The Beatles got together and formed a band. The song starts slow but shifts quickly into an upbeat Pop/Rock arrangement that's irresistible. This energy and sound carries over to Welcome To The Sun, although a definite Lo-Fi element creeps in to the sound. All Those Dancing Stars explores an unhealthy fascination with mortality against the backdrop of an occasionally uncomfortable relationship that expresses the narrator's ambivalence in dissonance. Good In The Bad comes as a straight forward Pop/Rock tune but deals with some darker subject matter about human nature. The combination of the Lo-Fi sound and Pop-oriented arrangement is a bit jarring; it's a pleasant song to listen to if you can get by the incidental dissonance and tension in the arrangement.

Jealous Boys finds Hotel St. George turning more fully to their Pop proclivities on a post-punk gem with real potential for radio. Jealous Boys is the best pure listen on the disc, and the energy here is a bit infectious. Hotel St. George nearly loses it in Trouble, coming close to flying right off the rails but holding on for deer life. This should be a definite concert favorite. Hotel St. George strips down to bare acoustics for City Boy Lemon, a brief and puzzling entry before cranking up the amps on All The Rich Folks. All The Rich Folks puts hypocrisy center stage, exploring the divergence at times between beliefs and actions while attacking excess. The song is mildly catchy and is likely to strike some chords in the current economic environment.

Hotel St. George is an interesting find. They're not going to be everyone's cup of tea, playing in the less-trodden paths of bands like The Rheostatics and The Residents. City Boy Lemon isn't one of those albums most people will immediately take to, but if you wrestle with it you'll find definite rewards. To call Hotel St. George a Lo-Fi Band, a Pop band, a Rock band or even a British-Invasion disciple; any of these monikers carries an element of truth, but none are correct on their own. Hotel St. George is all-of-the-above, and the mix, if not unique, is certainly not a common one. Check out Hotel St. George, and given them a chance. There's treasure to be found if you dig.

You can learn more about Hotel St. George at www.myspace.com/hotelstgeorge. Hotel St. George’s My Space page indicates City Boy Lemon is now available, although I could find no online outlets for the album. Keep checking Hotel St. George's MySpace page for more info.
Posted by Wildy at 5:00 AM

Labels: The Beatles, The Kinks, The Residents, The Rheostatics