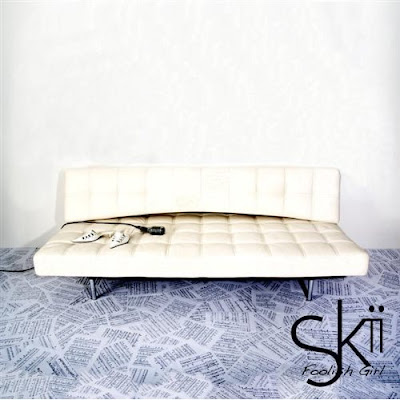 Australian singer/songwriter Skii Harvey is going to knock your socks off. The lifelong singer/songwriter with the platinum looks like she could be a Mrs. Robinson type, but when she opens her mouth it's not the silky sounds of suburbia that emerge but the gritty soul of Tina Turner. Harvey's sophomore album, Foolish Girl is steeped in Soul, Rhythm & Blues and top-notch musicianship.

Foolish Girl opens with the title track, heralded by horns and backup singers emulating a scaled down gospel choir. Harvey sounds a lot like Tina Turner here, from tone to rasp to phrasing. Foolish Girl is a legitimate Pop/R&B song, capable of making a run at Adult Pop charts on this side of the Pacific. Love Remembers has a Motown meets Chicago (the band) feel. Harvey uses her dynamic voice to light up the moment for one of the best songs on the disc. On One Cross, Harvey digs into a meaty ballad about regrets. It's a decent song, but Harvey's voice is just a little too heavy this time around, wearing on the melody and the listener.

Matador takes on a slinky Latin feel with Harvey's worldly voice taking control from the opening line. It's a very catchy arrangement that is sure to get you moving. Harvey's turn at a jazz standard-style tune goes a little awry on Wounded Knee. Loosely using the title from the Dee Brown novel without any real connection to the story. It's a slightly befuddling choice that only seems to get more surreal as it goes on. Harvey's vocal line is decent, but the tune is something of a metaphysical mess that sounds decent musically but falls apart married to the lyrics. Harvey recovers nicely on Cold Wind, a soul/gospel/jazz hybrid that's a pleasing listen and allows Harvey to be at her best vocally. The Way It Was sounds like an R&B ballad you might have heard on the radio in the 1980's from someone like Philip Bailey. It's a lush arrangement with vocal harmonies and horns and turns out to be quite a strong track. Harvey closes out with How Long? (New version), a plodding song that might have been something of an afterthought.

Skii Harvey has a tremendous voice, although there are some things she sounds better on than others. In her lower register and at soft volumes, Harvey's voice is just too heavy to enjoy at times, but her overall sound is undeniable. Foolish Girl is a decent effort; it has its high points and low points but on balance is a highly listenable and enjoyable album. Take some time to check out Skii Harvey

You can learn more about Skii Harvey at http://www.skiiharvey.com/. You can download Foolish Girl from Amazon.com, or you can purchase physical copies directly from the band on their website.
Posted by Wildy at 5:00 AM