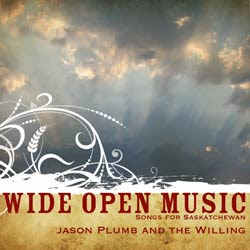 Jason Plumb's provincial Wide Open Music features songs about or inspired by Saskatchewan, Canada. You might think such a geographically focused album would have limited appeal, but Plumb is such a great songwriter that even the most obtuse listeners will fall in love with the Canadian Prairies. Wide Open Music features songs from Plumb's Waltons and solo days as well as a few tracks that haven't appeared on CD before, all reinterpreted masterfully by Plumb and The Willing. This is one of those albums that will surprise you; suck you in and take you along for a pleasant ride you never expected.

Plumb himself is considered in some circles to be one of the best songwriters of his generation in Canada. Some might even argue that he deserves to be included in any such conversation irrespective of country. It's not often that an album comprised primarily of previously released material might rate so highly on a year-end list, but Wide Open Music is special, indeed.
Posted by Wildy at 5:05 AM