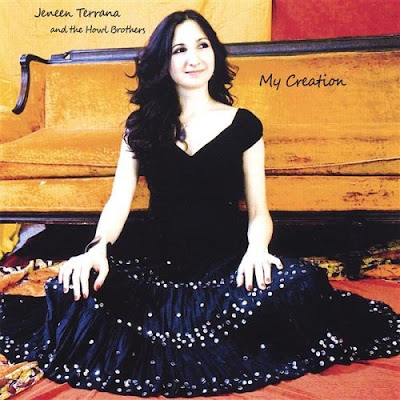 1 Jeneen Terrana & The Howl Brothers - My Creation
Buffalo, NY born and raised singer/songwriter Jeneen Terrana has been based in New York City for several years now, but she hasn't forgotten her roots. Terrana's My Creation is the finest overall recording we reviewed here at Wildy's World during the past year, and is our pick as album of the year for 2009. Terrana may not have a lot of name recognition outside of New York City or Buffalo, but that's more an indication of what's wrong in the music business than of anything about Terrana herself. Mixing elements of Norah Jones, Sarah McLachlan, PJ Harvey, Ani DiFranco and Joni Mitchell, Terrana is an every-woman singer/songwriter whose music speaks across social and generational boundaries in a fashion many of her peers have never imagined.
Note: My Creation technically has a 2007 release date, but did not go into wide distribution until 2008 and was not reviewed until January of 2009.
That's it folks! We'll be back tomorrow with fresh reviews. Let's hope 2010 is a bright one!
Posted by Wildy at 5:05 AM