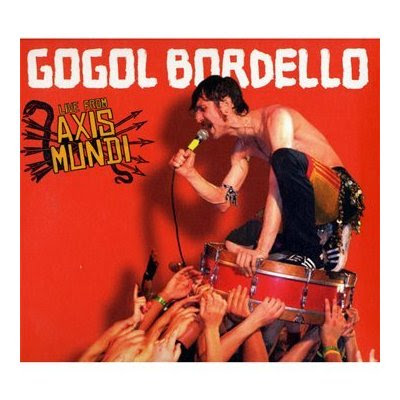 If anyone has known personal anarchy its Gogol Bordello founder and front man Eugene Hutz. Forced from his home in the Ukraine by the Chernobyl disaster in 1986, Hutz lived in Hungary, Austria and Italy before settling in New York City. The range of influences and experiences Hutz has encountered on his life's journey have been channeled into the Gypsy Punk styling of Gogol Bordello. Wowing fans on major stages all over the world, Gogol Bordello has built a steady following for their brand of high energy musical mayhem, highlighted by performances at Glastonbury, Fuji Rock, Roskilde and Coachella. Gogol Bordello's latest release, Live From Axis Mundi, is a tip to fans including live recordings, rare tracks and even a bonus DVD with music videos and special features.

The first six tracks on Live From Axis Mundi are from a BBC Radio 1 performance from March of 2008. Gogol Bordello opens with Ultimate, sung in both English and Russian. The song takes on peoples tendencies to romanticize the past and demonize the future, pointing out that little really changes. The energy here is incredible, drawing a distinct Slavic energy and style that's likely to be novel to audiences when combined with Rock N Roll. Wonderlust King is the tale of a man who isn't happy or comfortable unless he's on the move. An interesting comparison struck me in the middle of this song. There isn't a lot of linear relationship between what we call "gypsy" music and Celtic music, but if I had to pick a comparison here it would be to Canadian Celtic rockers Captain Tractor based on sound and attitude. Mishto turns into an extended jam here, but is a highly danceable and energetic tune. I thought the interpretation went on a bit too long for home listening, but I could see it being just right live.

American Wedding has an almost disco feel to it, comparing the institution to the ultimate party. Gogol Bordello nearly flies off the rails here, exploding with energy that seems as if it might just consume the band from time to time in a highly entertaining performance. Moving into the Super Taranta Sessions, Gogol Bordello offers up Stivali E Colbacco; I can't understand the words in the song (it's sung in Italian), but it's a highly entertaining and frenetically energetic recording. Troubled Friends steps back to the Gypsy Punk Sessions that led to the band's first album, and dubs the career paths of murderer and car dealer as equal. It's an entertaining song that runs a bit long at over six minutes. The demo recording of 60 Revolutions has all the energy of a live performance and likely could have been released as is. What's most intriguing about Gogol Bordello is that they can play on the edge of madness at their most inspired yet they never seem in danger of losing cohesion or technical proficiency. Gogol Bordello closes out with a demo and then an instrumental version of Immigrant Punk, a spirited and dance-worthy tune that sounds a bit like Ron Hawkins jamming with Boiled In Lead during their Songs Of The Gypsy sessions with Steven Brust.

It's not hard to see why Gogol Bordello has a tendency to captivate crowds. The sound is novel to western audiences, sure, but that only takes you so far. It's the energy, conviction and overall musicianship that keep fans coming back. Even the DVD with its music videos get to know the band style features has its charms, but it’s the music that makes Gogol Bordello irresistible. Live From Axis Mundi was my first exposure to Gogol Bordello, and its one exciting introduction.

You can learn more about Gogol Bordello at http://www.gogolbordello.com/ or www.myspace.com/gogolbordello. You can purchase Live From Axis Mundi as either a CD/DVD set or Download from Amazon.com.
Posted by Wildy at 5:10 AM