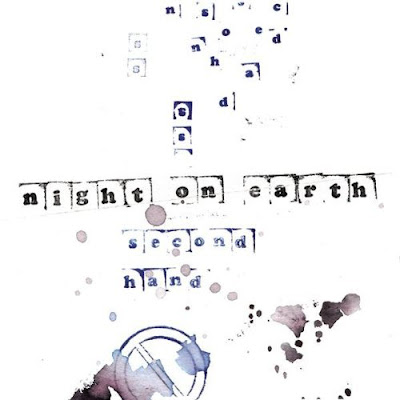 Night On Earth is an Athens, Greece octet with an unusual sound and approach. Trip Hop, Blues, Jazz and improvisational styles blend together to create a sound that, if not unique, is at least highly unusual. Aside from their work as recording artists, Night On Earth also compose music for films in their native Greece. Night On Earth’s latest effort, Second Hand should open some eyes. Sung in both Greek and English, Second Hand is captivating in its best moments.

Second Hand opens with Glosses Tou Kampou, an odd performance piece consisting of whispered words, loops, incidental instrumentation and a chant-like atmosphere. All spoken parts are in Greek so I can't tell you what it was about, but it was a jarring opening that kind of lost me. Lafira lays out sparse instrumental background and balances a sole cello against the mesmerizing voice of Sofia Sarri. Lafira is sung in Greek, meaning I have no idea what the song is about, but there is a deep sense of sorrow that runs through the song, almost like in an Italian recitative. Nightshift finds Night On Earth switching to English and creating a sparse, haunting musical setting for a song that's as lush and raw as it is Spartan and refined. Sarri doesn't fare as well on Crocus, pushing into a belt in her upper range and losing pitch and tone quality in the process. The song is interesting, but there's a lack of cohesion or narrative to bring it all together.

Sarri returns to her native tongue for Tou Asoutou, a tragic sounding song that has characteristics similar to a tone poem. Piano and bass combine in their own individual voices to create tension that fails to boil over into chaos. Atman travels an Alterna-Electro-Rock path that is more inured in sounds that notes; movement over structure. Sarri stands at the middle as the high priestess of the song, holding court among the crashing rhythms and ethereally charged voices that surround here. The song Prison is oppressive, dominating with repetition and instrumentation played at full crescendo for the latter half of the song. Gliding is more of a plodding tune than anything else. The sole life of the song is in the vocal line. Night On Earth settles into a comfortable mellow Rock arrangement for Within Fire, and then proceeds to turn it into a big Rock production full of guitars and layered sounds. Night On Earth sets with Vesper, an orchestrated work built on piano/keys, guitar, strings and distorted effects. The lyrical, casual balladry of the song is told primarily in the strings, which approach baroque affectations

Night On Earth brings an unusual sound to the table, walking through dark and ethereal lands on the way to a musical landscape where reality bends like light in a funhouse mirror. The arrangements have a disturbing beauty, and the vocals of Sofia Sarri are mesmerizing at their best. Second Hand is going to be a difficult proposition for many listeners; the sounds and songs here don't necessarily fit into the standard conception of Pop or Rock music. There is gold here for those willing to dig, however.

You can learn more about Night On Earth at www.myspace.com/nightonearth or http://www.noeband.gr/. Second Hand is available as a download via Amazon.com.
Posted by Wildy at 6:00 AM