Review: Stig Denson - Songs In The Key Of Stig 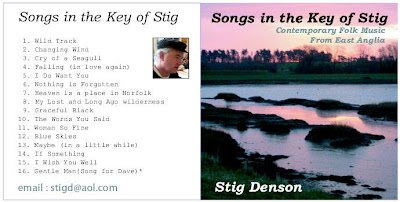 Stig Denson is an East Anglian Folk singer/songwriter who is something of a kept secret. He gigs regularly in Eastern England and has been a regular presence on the Folk charts at EZFolk.com, but isn’t widely known outside of England. Denson mixes traditional Folk tunes with pop covers and his own original material. Denson’s album, Songs In The Key Of Stig features 16 original compositions that run the gamut from mundane to amazing.

Songs In The Key Of Stig is remarkably consistent in sound, tempo and energy throughout. While this is commendable it nearly becomes a fault, as there is little variation to keep listeners engaged. Denson has a pleasant voice that fails to stand out, and the instrumentation used is simple and pleasant yet not compelling. Denson opens with arguably the best tune on the album, Wild Track. It's a celebration of nature and getting back to where we started with a decent melody. I Do Want You has mild mix-tape potential, but falls prey to cliché both lyrically and stylistically. Nothing Is Forgotten steps up considerably, with poignant lyrics and an antiquarian Celtic arrangement. Denson pays tribute to his homeland with Heaven Is A Place In Northport, which sounds like a Mix Tape song on first listen.

Graceful Black sounds like a wonderful song, although I found myself not enjoying Denson's read on it. Denson just doesn't wear this one particularly well. He hits the right notes on Woman So Fine, a love song that sounds like soundtrack material. Maybe (In A Little While) uses the "love is like tending a garden metaphor" for the umpteen millionth time since popular songwriting was invented. In spite of the well-trod path, it's a sweet song, although Denson is a bit awkward lyrically here. I Wish You Well comes at the end of a relationship, where the protagonist carries no resentment or malice. Cliché is the word for I Wish You Well. Denson closes out with Gentle Man (Song For Dave), a memoriam that sounds like it may have been recorded/mastered at a different time than the rest of the album. As memoriam go it's a pleasant song that's apparently full of real affection, but its probably a proprietary song to those who knew the subject.

Songs In The Key Of Stig had some good moments, but on the whole it passed me by without making a strong impression. Denson has a pleasant enough voice and comes across as genuine, but there is no edge to the songs presented on Songs In The Key Of Stig; nothing to reach out and grab the listener and pull them along.

You can learn more about Stig Denson at his website, where you can order a CD copy of Songs In The Key Of Stig.
Posted by Wildy at 5:00 AM

This album deserves better than the 2.5 stars awarded, it is a fine example of contemporary acoustic folk with a great deal of variety amongst the tracks. Stig's voice is also special, very mellow and easy to listen to - it must be as I play the CD again and again. And some of the best songs - such as My Lost And Long Ago Wilderness, Cry of a Seagull and Changing Wind are not even mentioned in the review. Stig's lyrics are unpretentious but never cliched and he sings from the heart. The songs really mean something. This is a great debut CD from a fine singer.