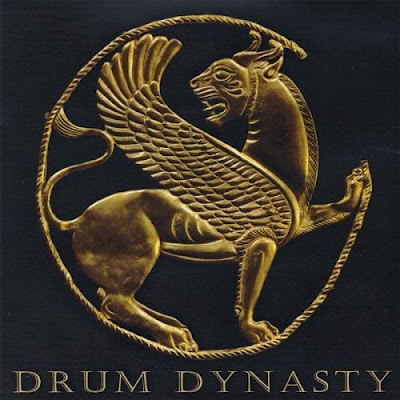 Sometimes accidents are really divine intervention. I wouldn't be one to ascribe the supernatural to how Drum Dynasty came to be, but don't be surprised when someone says it. Bruce Burgess spent a day at a local recording studio laying down rhythm tracks for his drum students to practice with. What was intended as an education tool was catalyzed in the hands of percussionists Arturo Rodriguez and Marco Zonka, who added in additional layers for their own students. Once film composer Kevin Christensen started adding background music in to fill out and house the rhythms, Burgess knew they were on to something special. Mixing primal rhythms and soaring New Age themes, Drum Dynasty captures one of the most original sounds in Indie Music. This is self-evident in Drum Dynasty's debut album, a two-disc affair entitled Drum Dynasty. The double album is split into two CDs: Mystic Sunrise and Dark Continent.

Both albums feature both primal rhythmic work and ethereal New Age material, but Mystic Sunrise seems to lean more toward the ethereal whereas Dark Continent more toward the primal. Middle Eastern, African and Far Eastern elements come into play on Mystic Sunrise, opening with the ethereally percussive title track. Al Jabr is a disturbing and beautiful composition that might accompany a scene of some unknown being climbing out of subterranean mists; it invokes a similar energy. Karma has an other-worldly feel, incorporating India and possibly Thai influences. Drum Dynasty takes on the Dance Of The 7 Veils in an unexpectedly subtle version that I am still getting used to after nearly a dozen listens. Twenty Drawings is intriguing; a marriage of two distinct rhythmic parts that works better than it has any right to. My favorite track on Mystic Sunrise, however, is Sandstorm. This might the most complex work on either album, and incorporates sound effects, background noise and wonderfully deep rhythms to create not just music but an experience. Other highlights include Dajari, Damsels Of Brindiban and Masalama.

Dark Continent opens with jungle sounds and becomes a pensive rumination with a prehistoric feel. Primitive rhythms and even jazz are represented here, dancing around the edges of the song like shadows about a fire. Dark Continent isn't so much about composition as it is mood and moment, but works brilliantly. Katavi uses percussion as an instrument of melody over the backdrop of rhythmic percussion and ethereal synth work. Hemiola is a percussive waltz with fills that Buddy Rich or Neil Peart would shake their heads in wonder at. Warfare is a compelling piece as well, using a martial feel imposed on rhythms and chant to simulate the coming together of two distinct forms of communication. Tension exists even as the two schools of thought coexist. Rainmaker again uses percussion to create and sustain melody and vies for the title of best track on either CD. Shango plays like a drum solo you might have heard at a rock show in 1970's or 80's, using polyrhythmic variations in what I would call a "show off" piece for a drummer. The other true favorite on the collection is Dance Of The Flies, which uses African rhythms and chant blended into a more modern sound to create an enjoyable composition you'll keep coming back to.

Drum Dynasty is a compelling collection centered on the core rhythms of Bruce Burgess, bringing movement and rhythm out of the background and making them the primary musical voices. In a horse race, Dark Continent would beat out Mystic Sunrise by a step, but both albums rise to the level of brilliance at times. The blend of primitive and modern sounds captured by Drum Dynasty creates a compelling body of work in just two albums. I am excited to see what comes next.

You can learn more about Drum Dynasty at http://www.drumdynasty.com/ or http://www.kataviarts.com/. You can purchase a copy of Drum Dynasty as either a 2CD set or a Download from Amazon.com.
Posted by Wildy at 5:10 AM