Review: Hawksley Workman - For Him And The Girls 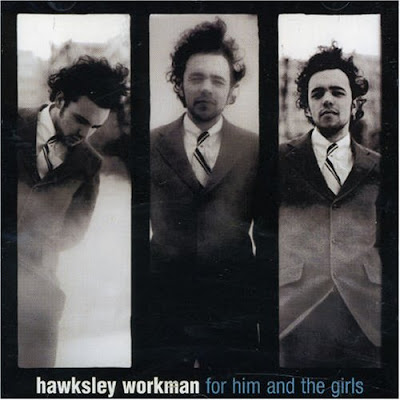 Ryan Corrigan, AKA Hawksley Workman, has been known to Canadian artists for a decade now as a Juno-award winning singer, songwriter and producer. A multi-instrumentalist with a sound that's drawn comparisons to Tom Waits and The Rheostatics, Workman mixes and melds quirky folk with Pop, Cabaret and even Glam Rock elements to create some of the most distinctive and original pop music anywhere. For Him And The Girls, his debut album, was originally released in 2000 in Canada, but recently had its debut in the United States. It is an eclectic collection of songs meant to help American audiences develop a taste for Workman's music in advance of the release of Milk & Meat in 2010. Aside from his own projects, Workman has produced albums/songs for Great Big Sea, The Cash Brothers, Sarah Slean, Skydiggers and Tegan and Sara, among others.

Workman opens For Him And The Girls with Maniacs, an ambitious and off-center rock tune that runs an almost Latin rhythm beneath a lyrically disjointed alt-rock tune that perseverates on "maniacs", "fatsos" and "slaves". Welcome to the world of Hawksley Workman, where social conscience and madness occasionally run hand in hand. Sissies is a deliciously upbeat Pop Rocker that will get inside your head and set up residence. This is one of those songs that ambushes your thought process three days after you've heard it and just won't get out of your head. Luckily it's well written, bordering on comical at times. Sad House Daddy has a cabaret feel; it amounts to an apology for everything from someone who might be segueing in and out of reality. Sweet Hallelujah is a lilting prayer; a gorgeous tune with a melody that's practically heart-breaking.

Bullets is an amusing tune full of campy machismo and wit; danceable and catchy and driven by a sense of invincibility that appears on its face to be ridiculous. Workman gives a highly emotive performance on Don't Be Crushed before transitioning into a quasi-Country/Pop sound on Stop Joking Around. Workman strips away all excess on Safe And Sound, an amazing love song offered here in a simple acoustic arrangement. This is a tune destined for Mix Tapes, movies, television and anywhere else a licenser could think to put it. Baby This Night is a slow jam for the 21st century Alt-Rock fan, with a slightly twisted turn. It's a strong song, although Workman does get a bit bogged down in repetition part way through. Workman closes out with Beautiful & Natural, a song that sounds like something of an ode but burrows through a dark psychedelia in tribute. You'll walk away thinking perhaps it was a sweet song as played in the sort of distorted funhouse sounds you hear in horror movies.

Hawksley Workman is nothing if not enigmatic. I don't know if this is the album I would have used to introduce him to US audiences (I might have chosen (Last Night We Were) The Delicious Wolves)). but it is a fair representation of where his muse leads. That being said, For Him And The Girls is a brilliant collection that will intrigue you and keep you off balance as a listener. Workman knows how to push a listener's buttons, but not so far that he drives you away. Quite to the contrary, you're likely to stick around even if it’s just to see what he might do next.

You can learn more about Hawksley Workman at http://www.hawksleyworkman.com/ or www.myspace.com/hawksleyworkman. You can order a copy of For Him And The Girls from MapleMusic.com, or you can download the album from iTunes.
Posted by Wildy at 5:36 AM