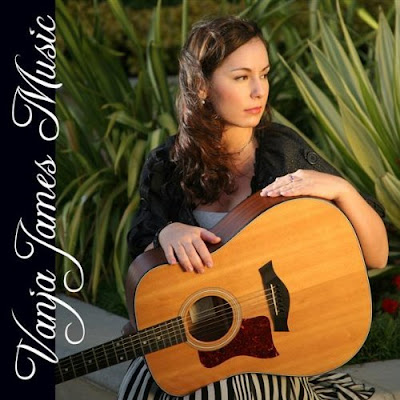 San Diego's Vanja James was a child prodigy, graduating from high school at the age of 15 and college at 19. Consequently her musical exposure was a bit different than most of the folks she grew up with. In her adult life, James continues to blaze her own trail, doing all of her PR and booking on her own in addition to making music that has earned her the reputation as one of the gems of San Diego's Indie music scene. James has a voice that's bigger than life, and a personality to match. Her debut album, Music, finds James creating music that runs across genre boundaries with distinctive instrumentation and an eye for detail that's rare in popular music.

James opens with the vibrant acoustic rocker On Your Own, belting her way through a quintessential rock song with an anthemic chorus. James' voice is truly a treat, warm and lush but able to turn on the power at a moment's notice. Beautiful Mess is one of the more interesting love songs I've heard this year (or any year); an honest invitation from one imperfect person to another. I can imagine this tune ending up in a film or TV soundtrack without any difficulty at all. Craptastic is an amusing song about finding the good in even the worst of days. It's a great Country/Rock arrangement that's highly entertaining and even danceable. James displays a sort of hard-edged grace here that's very appealing in a performer while making you feel like she could be singing about your experiences as easily as her own. Deal With The Devil finds James on a jazzy turn that's surprisingly powerful. This might be her best vocal performance on the album.

James turns highly personal on Won't Let Me Love You, one of the most emotionally moving songs on the album. The simple, compact arrangement of Won't Let Me Love You houses a melody with a simple, elegant beauty that stands out. James calls on listeners to get out of the doldrums on the bright, airy Sunshine. This is another track that seems destined for the licensing world; don't be surprised if you start hearing covers of this song down the line. The Bayou is an escapist fantasy in song that alternates between the peaceful moments of a getaway with the exciting pace of city life. I didn't necessarily like The Bayou the first time I heard it, but its one of those songs that grows on you with successive listens.

Sandman is intriguing; a song that wants to have a distinct Latin flavor but doesn't quite get there. Nevertheless it is an amazing song, driven by the diva-esque vocal performance of James herself. Vocals aside, it's the best pure songwriting on the album, but James approaches the vocal veracity of Grace Slick without hesitation. On War Song, James makes some very astute and intelligent criticism of war without falling into anti-war hyperbole. It turns out to be a powerful song and the vocal line is killer. James closes out with Avalanche, a big-time rocker where she proceeds to rip off the roof with the help of Clyde Bromarepps of Laserwolf & Thunderbolt on vocals.

Vanja James is a distinctive talent with a voice many performers would commit anti-social acts to have. As a songwriter she has some amazing moments but also a few that are more mundane. Her debut album, Music, is a great introduction to James as an artist. There are four or five songs here with serious commercial punch, whether for Radio or the licensing world. I expect big things of James in the future. San Diego's hidden gem can't stay hidden for long.

You can learn more about Vanja James at http://www.vanjajames.com/ or www.myspace.com/vanjajames. You can download Music directly from Vanja James’ website or from Amazon.com.
Posted by Wildy at 5:41 AM