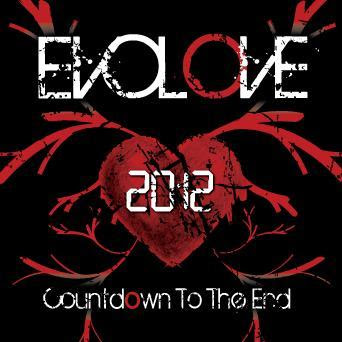 Los Angeles’ Evolove is an alt-rock band powered by the big voice of Lucy Levinsohn, with Billy Berman on bass, Jon Ruiz on guitar and Jae Wong on drums. Starting out as Waiting For Wyatt in 2007, Evolove has peppered the West Coast with shows ever since, building a steady following with the Hot Topic crowd. Evolove is more than just a look or a sound however; they’re an alt-rock band with real edge that maintains a pop sensibility that infuses their songs with life. Evolove’s debut album, 2012: Countdown To The End, is available now.

One of the first things you're likely to notice about Evolove (aside from their palindrome of a band name) is that lead vocalist Lucy Levinsohn sounds very similar to Gwen Stefani. That will color some folks' perceptions of the band, but with or without the comparison, Evolove has a great sound. Picking up on the mania surrounding the Aztec-prophesied end of the world, Evolove dives in with Let Me In, an exhortation for connection over pain. Toyshop Girl is a brief look at the life of one working class girl from a third-person perspective; questioning why she's so unhappy with her life. There isn't really a narrative here, just a brief sketch of an individual in song whom we never really get to know, understand or sympathize with. Lie To Me is a dysfunctional relationship song asking for lies rather than unpleasant truths. It's not a bad song, and Levinsohn's voice is at its best, but the best part is the contrast of an overtly simple Pop/Rock arrangement against the somewhat twisted desires of the narrator. On The Floor is a Dance/Party song that makes great use of the intersection of Modern Rock and Pop. This is one of those songs I like nearly in spite of myself; I don't want to like it because it's a bit juvenile but it's so catchy I can't help it. Evolove wraps up with the title track, providing musically graphic descriptions of the end of the world. The song is decent enough, but gets a bit bogged down in an attempt at philosophy that just doesn't fly as well as it might.

Evolove digs in to some meaty music on 2012: Countdown To The End, building tension and angst in behind Levinsohn's eerily recognizable voice. The band may get tagged with the moniker of being a No Doubt clone, but that's not really fair. While Lucy Levinsohn does sound a lot like Stefani, this really isn't No Doubt's Vibe. Evolove is a bit heavier and several shades darker than No Doubt ever was, and while they write and perform interesting material, the overall accessibility just isn't on a par with Stefani and crew. Nevertheless, 2012: Countdown To The End is an interesting first step, and we'll be curious to see what comes next. Check out Evolove; they're definitely worth spending a little time on.

You can learn more about Evolove at http://www.evolovetheband.com/ or www.myspace.com/evolovetheband. You can purchase 2012: Countdown To The End on Evolove’s MySpace page using SnoCap.
Posted by Wildy at 5:24 AM