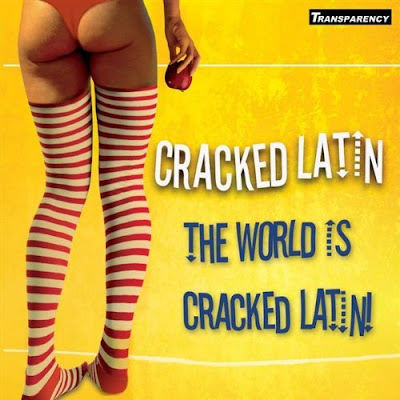 Tito Puente meets Syd Barrett. They Might Be Giants meets Os Mutantes. These are the sort of comparisons mentioned when discussing Cracked Latin, the duo consisting of Lane Steinberg (The Wind, Noel Coward's Ghost, Wall Of Orchids, Mustafio) and Luis Accorsi (Jainz Kapella, Man's Laughter). Steinberg and Accorsi took the inspiration of Johnny Pacheco's Fania All-Stars and channeled it through Rock and Pop influences to create a hybrid sound that dances from Salsa to Latin Rock and back. Cracked Latin's debut album, The World Is Cracked Latin, is sung in both English and Spanish, and is highly accessible.

Cracked Latin sets out with Your Miami, an instrumentally smooth and vocally messy experience that's hard to rectify. This is a great song to dance to, but not necessarily a great listen. My Hallucination is aurally twisted and out of perspective, giving a musical parallel to the subject of the song. The arrangement is quite well done, but always on the edge. It's not a comfortable listen, but an interesting one. The Caracas Shakedown recalls an experience Accorsi had in his native Venezuela in the days of youthful indiscretion. It's a highly danceable tale of adventure and danger. Cracked Latin hits a Cuban vibe on The Expatriate before getting lost in a psychedelic Salsa/Rock mess on En Estos Tiempos.

Things pick up a bit on Xulfa, perhaps the most wonderfully bizarre song on the album. Accordion mixes with Latin style in a primarily rock arrangement that will have your head spinning and your feet tapping. We Are Cracked Latin! wades headlong into musical waves of madness in a kinetic arrangement that will leave you figuring out to Slam Dance the Merengue, even adopting some of fugue style of later Beatles recordings in the process. The Lord Jim wants to sound like a tune you might hear in a Western film dealing with Mexico and the Southwest US, but has a very dark tone and urgent feel that becomes psychedelic than anything else.

In Memory Of A Departed Therapist is a mess, pure and simple. I realize this is probably more artistic than accidental, based on the subject matter of the song, but it's a difficult listen. Much the same can be said of International Accident, although at least the carnage is at a slower speed and therefore easier to follow. Things don't really improve a great deal over the last two songs. Diggin' Bonez features a solid dance beat but fails to break out of the psychedelic doldrums Cracked Latin has fallen into, and Wicked (She's Wicked) surrenders entirely to the darker side of Cracked Latin's madness.

There are some very positive things going on with Cracked Latin. We Are Cracked Latin! has some great moments, but the band gets too mired in attempts to sound psychedelic and forgets how good they can be creating music as the album progresses. I expect Cracked Latin will have some success with We Are Cracked Latin!, but the sound is likely to be more of a novelty than a long-lasting relationship with listeners.

You can learn more about Cracked Latin at http://www.crackedlatin.com/ or www.myspace.com/crackedlatin. You can purchase a copy of The World Is Cracked Latin! On CD directly from the band, or you can download the album or individual tracks from iTunes.