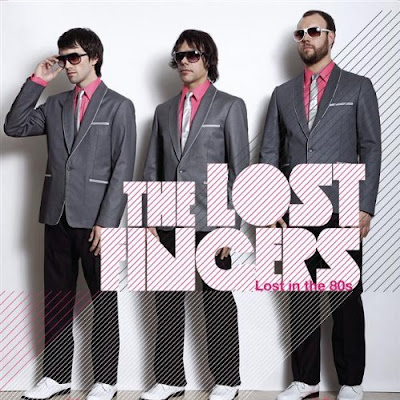 Canadian trio The Lost Fingers know a little about what it takes to make good comedy. Don't get me wrong, there's nothing comical about the music of The Lost Fingers, but George Carlin used to say that the job of comedian was to take things you already knew and show them to you in a different light. That's what The Lost Fingers do on Lost In The 80's, a collection of cover songs presented in jazzy, acoustic renditions that are likely to surprise and amaze you. The Lost Fingers, named in memory of jazz guitar great Django Reinhardt, have already achieved Gold Record status in Canada and been nominated for two Juno Awards with Lost In The 80's. The album is now available in the US for the first time.

The Lost Fingers open with a cover of Technotronic's Pump Up The Jam, a tune that starts a bit slow but quickly comes up to speed. The jazzed-up version will appeal to fans of Squirrel Nut Zippers, and the instrumental work is absolutely flawless. You Give Love A Bad Name (Bon Jovi) has a frenetic feel, particularly in the guitar part, which is about as blistering as you can get with an acoustic guitar. You Shook Me All Night Long (AC/DC) could easily have been translated as a high energy tune, but The Lost Fingers made the brave decision to present it as a languorous tune complete with scat-singing. The risk pays off here in one of the most intriguing songs on the album.

The rendition of Luc Plamondon's Incognito (made famous by Celine Dion) is surprising in that it sounds like it might have come out of a European holiday film. Incognito goes down as a fine cup of espresso. Samantha Fox' Touch Me (I Want Your Body) again sounds like a Squirrel Nut Zippers rendition and is highly danceable (although perhaps not in the fashion Ms. Fox might have originally envisioned). The guitar work here is especially fantastic. Stevie Wonder's Part-Time Lover is given real life as a swing tune. In spite of some stylistic touches and changes in instrumentation the song remains essentially unchanged from the original, although it is interesting to hear the nuances acoustic instruments bring out in the classic Pop/R&B tune. Likewise for Kool & The Gang's Fresh; this cover works a lot better than I might have expected and is likely to bring big smiles live.

Perhaps one of the most interesting covers given his untimely demise is The Lost Fingers' take on Michael Jackson's Billie Jean. It's the best cover of Billie Jean I've heard; the Jazz setting works particularly well for this tune, bring out some of the natural energy in the chorus. Wham's Careless Whisper gets similar treatment, and once again the cover works better than I would have thought. In this case it actually sounds better than the original. Soft Cell's Tainted Love is interpreted here is a moody and off-kilter tune with some unusual vocal harmonies. It's once again one of the best covers of the song I've heard, although all covers of Tainted Love have forever been overshadowed by Dan Akroyd's nasally percussive version from Coneheads.

The Lost Fingers enter the Space Cadet service with a terrific rendition of Paula Abdul's Straight Up. As usual, the strong vocal lines are simply an appetizer for the splendid instrumental play of The Lost Fingers. Alannah Myles' Black Velvet gets sent up in a version that captures the wanton sensuality of the original. This may be one of the more underrated songs of the 1980's; a classic in sheep's clothing, but The Lost Fingers unmask it for the quintessential song it is. Lost In The 80's closes with a pair of Francophone tunes. The first is Joe Le Taxi, a song written for Vanessa Paradis in 1987 by Franck Langolff and Étienne Roda-Gil. Sung in French, the song has a Mediterranean feel that sneaks into the Gypsy Jazz arrangement. The Lost Fingers follow up with Belleville Rendez-vous from the animated Les Triplettes de Belleville (2003). Written by Benoît Charest and Sylvain Chomet, the song was nominated for an Academy Award for original singer Béatrice Bonifassi. The Lost Fingers run with the song, providing a high energy reading that's highly entertaining and bound to inspire some dancing.

The Lost Fingers bring a breath of Fresh Air to the 1980's and beyond, provide renditions of classic songs so full of energy and life you can't help but be hooked by the experience. It's no wonder The Lost Fingers are major stars in Canada; I have no doubt they'll repeat their success in the United States, Europe and beyond. Lost In The '80's rises above the genre of "cover album" to true artistry; make sure you give it, and The Lost Fingers, the time of day.

You can learn more about The Lost Fingers at http://www.thelostfingers.com/ or www.myspace.com/thelostfingers. You can purchase Lost In The 80’s as either a CD or Download from Amazon.com.
Posted by Wildy at 5:40 AM