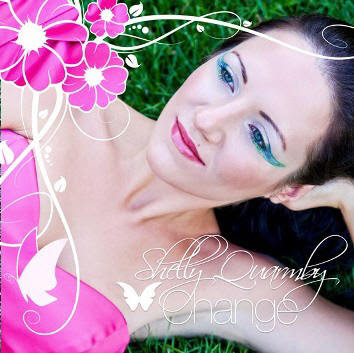 Born in Johannesburg, South Africa and raised in Staffordshire, England, Shelly Quarmby decided to record her debut EP, Change in Toronto, Ontario, Canada. Years of training in music, voice and even ballet have led up this moment, when the world-at-large learns about Shelly Quarmby.

Quarmby opens with If You Could Only See Me Now, using her lush voice and warm phrasing to shape the melody into a thing of beauty. A fairly simple arrangement serves to highlight Quarmby's voice, which is part Sarah McLachlan and part Paula Cole. If You Could Only See Me Now is a song that looks back at an old love through the eyes of melancholy. Quarmby maintains that same feel on the opening bars of Change, moving quickly to an upbeat tempo that tries to escape its melancholy roots but never quite manages. It's a song about the human tendency to embrace change in theory but rarely in fact. Who's That Girl is an interesting song about how life sneaks up on us sometime. One day we might look in the mirror and realize suddenly how much older we look, or wonder where the person we've always been went. Who's That Girl seems to explore that phenomenon in poetic terms. It's a pleasant song with a touch of Pop sensibility. Love's Not All There Is To It is a mature look at love and a future in marriage; children and all that come with domesticity. It's a beautiful melody that looks at love through a deeper lens than what's generally touched upon in popular music. This arrangement has just a touch of Country flavor to it and could easily be interpreted as a Country tune, but is more of an Adult Contemporary Pop tune as presented. Let Me Be The One shows the same sort of mature songwriting perspective, asking for the space to live her own life in conjunction with the life of another. It's a beautiful melody and very much a pleasurable listen.

Shelly Quarmby has a voice and musical style perfect for Adult Contemporary radio, crafting melodies that fit in nicely between the singer/songwriters of the 1970's (Dan Fogelberg, James Taylor, Carly Simon, Joni Mitchell) and the Adult Pop of today. Her writing perspective is very mature, involving thought, which can sometimes be detrimental to Pop radio exposure, but Quarmby is warm and likeable in her delivery and breezes right by that potential roadblock on Change. Quarmby could use a foil in her creation process, even if it were a talented instrumentalist who would challenge her arrangements on occasion, but Change is a very promising debut. Keep your eyes out for Shelly Quarmby. I have a sneaking suspicion this isn't the last we'll be hearing from her.

You can learn more about Shelly Quarmby at http://www.shellyquarmby.com/ or www.myspace.com/shellyquarmby. You can purchase a copy of Change as either a CD or Download from CDBaby.com.
Posted by Wildy at 5:00 AM