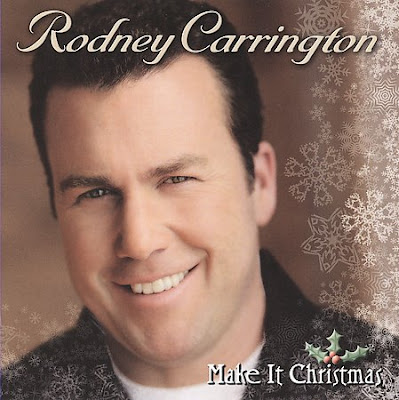 Rodney Carrington is something of a jack-of-all trades: comedian, actor, entertainer, and now a singer. Carrington recently released a Christmas album, Make It Christmas. It’s better than you might expect.

Carrington opens with a version of Have Yourself A Merry Little Christmas that sounds like it was taken from the Tony Bennett songbook. Carrington's voice is pleasant, although it’s clear that singing isn't his primary vocation. Grown Up Christmas List is an altruistic wish for the world that carries a touching authenticity. Carrington's singing style is a bit reminiscent of Barry Manilow on this tune. Winter Wonderland has a similar big band as that heard on the opening track. Carrington sticks to the song as written, preferring tradition to his own imprint. Camouflage And Christmas Lights is a touching holiday tune written from the perspective of a soldier spending another Christmas away from his/her loved ones. This tune will hit home hard for those overseas and the families they've left behind; it's an entirely apolitical look at the personal cost of war, and all the more powerful for that fact.

No Christmas album is truly complete without Irving Berlin's I'll Be Home For Christmas. Carrington sticks with the big band/orchestra style arrangement he seems most comfortable with. The reverie of the song gets a little lost here, as the pacing of the song doesn't lend itself to that feel, but it's still an affable take on a classic song. In another nod to tradition, Carrington sings the full version of White Christmas (the first verse/prologue is often dropped nowadays). It's a decent rendition, but once again there's a gloss on the tune that seems to belie the melancholy reverie of the original. Carrington tackles the Mark Lowry/Buddy Greene penned Mary Did You Know with a sense of reverence but also an emotional distance that just doesn't entire fit the song. On second thought, it's not really emotional distance, but a dearth of emotive modulation or expressiveness that makes Carrington seem less than fully committed to the tune.

The Presents Under The Tree (Better Be For Me) is a cute, non-traditional (but honest) sentiment for a narcissistic Christmas. Make It Christmas attempts to be the sort of unifying pop Anthem that defines a holiday but misses badly. Carrington's rendition is decent, but the song is just a bit too rote to really ring true. Carrington closes with Presence Of Love, a reminder of what Christmas is all about. Once again, the intent gets a bit lost in the formulaic feel of the song, but Carrington's heart is in the right place.

Rodney Carrington presents a decent and moderately charming effort in Make It Christmas. Carrington won't be confused with the great vocalists any time soon, but his voice is pleasant enough to listen to. The album is a bit on the traditional side, but offers a brilliant original turn in Camouflage And Christmas Lights as well. If your tastes run anywhere from Country to Big Band Jazz, Make It Christmas is a Christmas album you'll enjoy.

You can learn more about Rodney Carrington at his web site, where you can purchase a copy of Make It Christmas in the store section.
Posted by Wildy at 5:10 AM