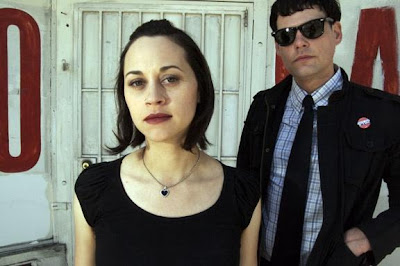 Sometimes it’s just a matter of finding the right roles for everyone. Not that there was anything wrong with the band Your Enemies' Friends, who topped the CMJ charts and toured with/opened for acts such as Spiritualized, TV On The Radio and The Mars Volta. Vocalist/guitarist Ronnie Washburn and guitarist/vocalist Jennifer Goodridge had a good run with Your Enemies' Friends, but both desired a different direction or focus. Goodridge and Washburn spun off into a duo, with Goodridge taking over lead vocals. Before long they were joined by Justin Taylor (keys/guitar/vox); Ross O'Carroll (bass) and Isaac Carpenter (drums), winning critical acclaim and packing houses in Los Angeles. Seaspin's debut EP, Reverser, was produced by Washburn and Warren Huart (The Fray), and attempts to capture the band's live sound.

Opening with Love Is A Fable, Seaspin sets a reserved tone right out of the gate. Love Is A Fable plays like a melodic power ballad where all rough edges have been smoothed away. Goodridge has a decent sound, but its hard to tell from the first song how accomplished her voice is as she never really extends herself during the song. Dream Life is hypnotic and colorless, eschewing any real sense of dynamics for lush consistency. Goodridge has a nice sound, but again, there's no stretch here. Give Yourself finds Seaspin treading musical waters; the sound doesn't change and even the short EP begins to acquire a sense of monotony. Reverser finds Seaspin trying to raise the level a notch, but the same overly-lush rock feel is there. Seaspin closes out with both Goodridge and Washburn on vocals. The net effect is the same however, there's very little dynamic variation short of the noise collage at the very end of the song.

Seaspin is instrumentally sound, and both Goodridge and Washburn have pleasant enough voices, but there is some essential spark that just didn't make it onto the Reverser EP. I kept waiting for a spark that would send Goodridge on a vocal tizzy or Washburn into the guitar stratosphere, but neither of these happens during the Reverser EP. The sounds on Reverser as pleasant, but there's not a lot of vibrant energy in the performances.

You can learn more about Seaspin at http://www.myspace.com/seaspin%20or%20seaspin.wordpress.com. No online outlet for Reverser is noted, although you can stream tracks on Seaspin’s MySpace page.
Posted by Wildy at 5:00 AM

Labels: Mars Volta, Spiritualized, The Fray, TV On The Radio