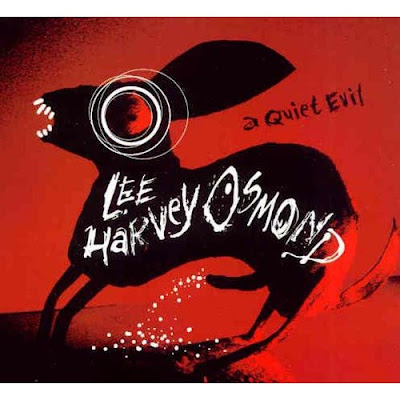 Toronto singer/songwriter Tom Wilson has been associated with some exciting projects over the years, starting out with his tenure as lead singer for the band Junkhouse in the mid-1990's. Since that time he's recorded as a soloist, in conjunction with Bob Lanois and as a member of Blackie And The Rodeo Kings. Now, at the tender young age of fifty, Wilson is embarking on a new life as lead singer of Lee Harvey Osmond. Joined by members of Canadian groups Cowboy Junkies and Skydiggers, Wilson brings to life 10 brooding Americana/Rock tunes on A Quiet Evil. Produced by Cowboy Junkies' Michael Timmins and released on the band's Latent Recordings, A Quiet Evil is one of the more intriguing debuts of the year.

Lee Harvey Osmond opens with The Love Of One, a quiet-yet-energetic country flavored rumination on loneliness chock full of mournful pedal steel guitar and incredibly tight musicianship. This song is the perfect example of how music can be quiet and lively at the same time. Cuckoo's Nest drops the names of Elvis Presley, Sonny Liston, Madonna and Robert Mitchum, but has the up-close-and-personal feel of a Lou Reed track. Cuckoo's Nest is a nuanced and intelligent story song about hard times and how people survive. Wilson talk/sings his way through this one in what ends up sounding like a highly allegorical autobiography in song. Queen Bee has great energy and instrumental work; the vocal line gets a little bogged down in repetition but quickly gives way to the fine instrumental work of Lee Harvey Osmond.

I'm Going To Stay That Way is a classic country love song/tragedy. Suzie Vinnick's vocal on the duet is exquisite, and mixes well with Wilson's mumbling style. I'm Going To Stay That Way is a song that could go directly to Country Radio, although it would have been a more likely hit a generation ago. Lucifer's Blues is a great listen, although I half expected it to blow up into a heavier sound before it was done (it did not). The understated arrangement and delivery works very well, however. Parkland has a catchy melody and rhythm in spite of the reserved sound, and then something magical happens on Summer Girl. The same quiet feel surrounds this song, but there's a feel of authenticity about the story Wilson tells here that's too rich to be cure creation. The arrangement is highly simplified; giving the sort of life to the story and melody line that can't be planned but just happens in the creation process sometimes. Angels In The Wilderness has a similar feel in spite of the more melancholy bearing of the song. It's a beautiful melody with stirring imagery; a hidden gem. Lee Harvey Osmond closes out with the upbeat acoustic rocker I Can't Stand It, a paean to the ability of love to make day-to-day life more bearable, and how it can all come crashing on you when they leave. It's a fun song that's likely to get worked up even more on stage.

Lee Harvey Osmond isn't going to blow too many people away, unless it's on pure talent. This isn't that sort of band. Instead, expect Lee Harvey Osmond to take a lot of people by surprise. A Quiet Evil is the sort of album where you hear a song in the background and don't pay attention at first; but the music slowly draws you out and draws you in. It's not surprising given the musical stock the band rose from, and Wilson, in spite of his quiet approach, definitely has an ability to connect with listeners. A Quiet Evil is highly enjoyable; it might take you a few listens to really get it, but once you get it you'll be hooked.

You can learn more about Lee Harvey Osmond at www.myspace.com/lhosmond or www.latentrecordings.com/leeharveyosmond. You can purchase A Quiet Evil on CD from Amazon.com.
Posted by Wildy at 5:10 AM