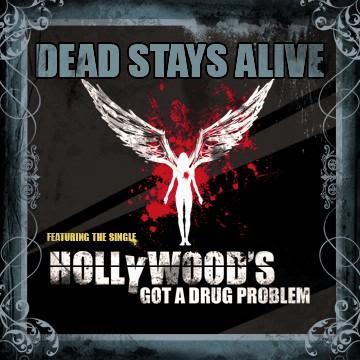 Having your lead singer pal around with Lindsay Lohan in rehab isn’t a mark of musical quality by any stretch, but in a celebrity-obsessed world it will certainly draw you some attention. If it works for Dead Stays alive, then so be it. Scott Mikell and Tony Allen were high school friends who both dreamed of a career in music. These days the Atlanta duo is a hot, up-and-coming name on the Indie Rock scene. Their band and debut EP name, Dead Stays Alive, might be representative of the continual process of rebirth of the human spirit, or perhaps just a morbid obsession with obsession.

Dead Stays Alive opens up Hollywoods Got A Drug Problem?, a catchy Rock tune built on a serious Pop hook. There's an implication here that Hollywood is a reflection of society, or at least of what we'd like it to be; both expectation and reality fall short, of course. Days Roll On is a mid-tempo rocker with a smooth Pop feel to contrast with the band's rough edge sound. This could in fact be the theme song for most songwriters/performers who are working their way through part-time jobs to keep their music dream alive. I wouldn't be entirely surprised to see this one licensed for a reality show about struggling artists. Tranquilizer is decent, but doesn't have the accessibility of the first two tracks. There's a great bit of almost crazy energy running through this song however, and it could be a sleeper hit. Even Up The Score includes excerpts from a Martin Luther King Jr. speech given in 1967 against the US mission in Vietnam. It's a pure Punk rock tune with a political agenda and works on that level. The energy level is high throughout, but the sense of ambivalence behind the song, "I can't say that I believe in anything anymore" is a thoroughly different motivation than what motivated the 1960's activism profligated by King and his contemporaries.

Dead Stays Alive makes a strong impression with their self-titled, debut EP. Here is a band that can write finely honed Pop/Rock songs with real potential as well as rip-it-up Punk Rockers with political and social weight in their messages. It's a recipe for success that could carry them a long way. Dead Stays Alive is a very promising debut. Check it out.