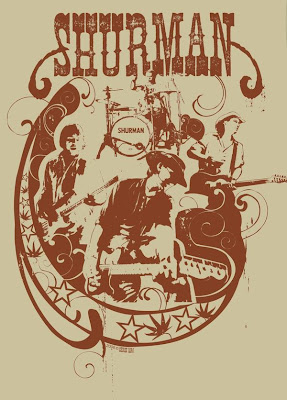 Los Angeles stalwarts Shurman have developed quite a following with their blend of Rock, Country, Punk and Americana, winning fans and rave reviews on two continents. Having just come off their first US/European tour, Shurman looks to continue their ascent with Still Waiting For Sunset.

Still Waiting For Sunset opens with the upbeat rocker Is It True, a tasty Americana morsel with a great melody and a beat that's certain to get your toes tapping. Small Town Tragedy is a song about the negative effects of drugs on the lives of every day people. The melody and beat are very catchy even if the subject matter tends toward dusk. Shurman gets a bit worn on Here To Rock-N-Roll, a fairly predictable anti-war song written from the perspective of the soldiers themselves. The arrangement is strong, fading out on a martial beat, but the energy of the song falters. Shurman makes a great recovery on She's The One, with great energy and a party-feel to the song. I'm Not Crazy could turn out to be something of an anthem. The arrangement is decent enough, but it keeps lead vocalist Aaron Beavers honest.

Country Ain't Country pays tribute to the classic artists of Country music while decrying the state of modern Country Music. The song is well done; a likely concert and fan favorite. Big Things has a sing-song Country feel and a vibe that may fit well with commercial Country radio. It's not Shurman's best material, but it has that Pop feel that would make for a song single. Wonder Where You Are sticks with that same Pop sensibility in mellow hues; the sort of song likely to end up as an incidental soundtrack song in the licensing world. Shurman closes out with the frenetic Three Chords, a Country-Rock freight train of fun. Three Chords is high energy; the sort of song practically guaranteed to get you dancing regardless of where your tastes run more toward Country or Rock N Roll.

You can learn more about Shurman at http://www.shurmanville.com/ or www.myspace.com/shurman. Still Waiting For Sunset is due in stores January 26, 2010. Keep checking Shurman's website for availability.
Posted by Wildy at 6:22 AM