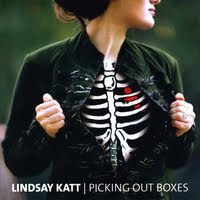 New York City hides a gem in singer/songwriter Lindsay Katt. Born and raised in the mountains of Montana, Katt escaped some of the cultural influences of her contemporaries until a bit later in life, allowing her creative juices to stew and come to fruition in a much less weighted environment. The result is a songwriting style that is brilliantly honest and full of amazing depth and insight. Add in Katt's voice, which is angelic, and you have a total package. Katt's debut album, Picking Out Boxes, is unforgettable.
Posted by Wildy at 5:05 AM