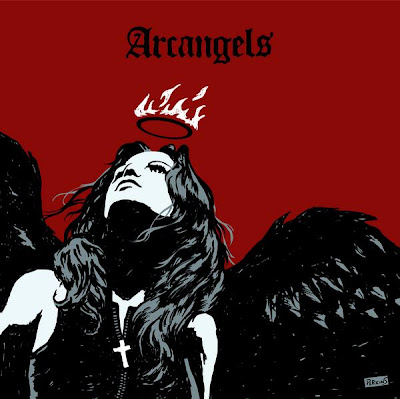 Arc Angels - Living In A Dream
2009, Visions
Arc Angels are a Blues/Rock super group of sorts, consisting of Doyle Bramhall II (guitar/vox); Charlie Sexton (guitar/vox); Marc Campbell (Arc Master); Chris Layton (drums) and Mark Newmark (bass). Newmark is a new addition to the band in 2009, replacing original bassist Tommy Shannon. Layton and Shannon were members of Stevie Ray Vaughan's Double Trouble until his untimely death, and have also recorded with Buddy Guy, Kenny Wayne Shepherd, John Mayer and Storyville. Bramhall has played with Eric Clapton and Roger Waters, while Sexton has toured with Bob Dylan. The band short-circuited in 1999 due to Bramhall’s substance abuse, but has reunited for shows periodically since 2002. In 2009, Arc Angels decided to give it a try once again. The resulting CD, Living In A Dream, is a live recording that captures the intensity and talent of a band that never really got a chance to find what they were made of the first time around. Living In A Dream is a three-disc set. Disc one is the live CD; Disc two is 4-track EP featuring three new studio tracks and one live track from Antone's. The other disc is a DVD videos, live cuts and other material.
Arc Angels survive in the Diaspora between Southern Rock, Blues and Americana, and Living In A Dream captures that zeitgeist perfectly. Arc Angels open with Paradise Cafe, a delicious bit of Southern Rock that sounds like a catchy, danceable Bob Seger tune. Carry Me On is a decent power-ballad that's a bit on the bland side but otherwise well done. My favorite song on the disc, The Famous Jane, explores the life of a Hollywood starlet (possibly Jane Seymour?) in fairly real-life terms. It's an incredibly mature and thoughtful biography in song. Good Time is top-flight Blues-Rock with an amazingly soulful vocal. She powerful Blues influence carries over to She's Alright, although the extended guitar jam is a bit much.
My other favorite from the live disc is Sent By Angels, which features a strong, memorable chorus and outstanding guitar work. Crave And Wonder finds Arc Angels stepping back a bit in a mildly catchy Americana/Rock arrangement. It's a good listen and a strong change of pace. Shape I'm In features some of the best guitar work on the album in a high energy tune you won't be able to get out of your head. Living In A Dream sounds a bit like The Black Crowes, leading into the final track, a ten-minute instrumental called Too Many Ways To Fall. No one will dispute the talents of the respective members of the band, but this one lasts perhaps five minutes too long.
The bonus CD includes three new tracks and a live version of Spanish Moon recorded at Antone's). Spanish Moon is a bit drawn out but a great song. Crave And Wonder is presented here as a studio track, actually surpassing the live version on Disc One. What I'm Looking For is a dark and moody mid-tempo rocker that's decent but not their best. Too Many People is a pleasant surprise, featuring a Beatles-esque chorus that should be an instant crowd favorite and inspire sing-a-longs from the seats.