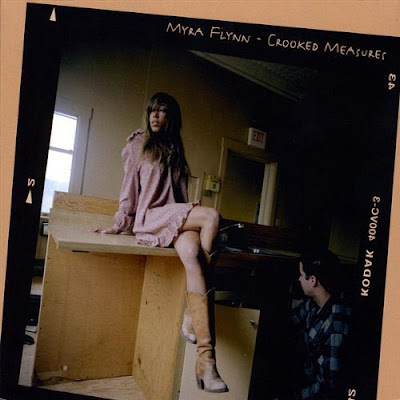 Vermont's Myra Flynn was writing songs before she ever thought to take the stage herself. Leaving home at the age of 16, Flynn found her way to New York City where she worked with Wyclef Jean's Refugee All Stars both in the studio and as a student for three years. She has opened for Ivan Neville, Alexa Ray Joel, Slick Rick and Lee "Scratch" Perry, and has been compared to Erykah Badu, Adele and Norah Jones. Flynn released her debut album, Crooked Measures in mid-2009, blending R&B, Soul, Folk and Rock into an intriguing mix of songs.

Flynn opens with Feels Like The Sunshine, mixing soulful vocals and a classic singer/songwriter pastiche into a melody that feels familiar right from the first listen. Long Fall Down is representative of the sort of relationship insecurities that can evolve from a simple look or tone of voice. Flynn is incredibly vulnerable here, and some of the deeper textures in her voice come shining through. Imagine if Tina Turner, Fiona Apple and Dionne Warwick were somehow combined into one DNA set; the voice might sound a bit like Myra Flynn. Flynn offers up something of a non-traditional love song on So It Goes; an introspective and self-aware examination of her own state of mind. Flynn's vocal here is outstanding as she emotes every crest and trough of the emotional roller coaster she's on. Bones, on the other hand, highlights some of the harder edge qualities of Flynn's voice and just doesn't work in this light.

Flynn dives into some torchy Blues/Folk on Small Talk, the best and most vibrant songwriting on Crooked Measures. This song will get your feet tapping and draw you in. What Am I is wonderfully minimalist, highlighting Flynn's vocals and harmonies in a compact arrangement that uses a very familiar chord progression. Where Do You Go is a lonely, melancholy tune in a dark Americana arrangement. The melody here is absolutely gorgeous, and Flynn gives a performance that's award-worthy. Flynn goes the a Capella route on Miss Independence, creating a very balanced intriguing arrangement that's a pleasure to listen to. Flynn closes out with the electronica/dance influenced Fragile. Fragile doesn't have the depth or sense of gravity that accompanies may of Flynn's songs, but is decent enough for what it is. On a positive note, the chorus is gorgeous.

Myra Flynn has a compelling voice, able to go from nearly-whispered vulnerability to full-out belting at the drop of the hate. Her band is solid and the production is deft. Crooked Measures ultimately lives and dies on the songwriting itself, which is mixed. Myra Flynn is the product of a very small music market, and her sound suggests a bending/blending of R&B styles with the local flavor. Flynn seems very comfortable with her sound, but it seems at times as if she might be holding back some other musical impulse. It would be quite interesting at some point to hear what that is. In the mean time, Crooked Measures is a strong introduction to a very talented singer/songwriter whom out to be on your "to check out" list.

You can learn more about Myra Flynn at http://www.myraflynn.com/. You can purchase a copy of Crooked Measures on CD from CDBaby.com. You may download the album through iTunes or Amazon.com.
Posted by Wildy at 5:00 AM