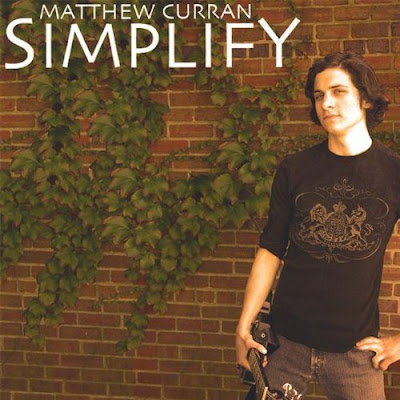 New Jersey singer/songwriter Matthew Curran was a child prodigy, becoming the youngest guitarist to ever, at the age of eleven, to be sponsored by Gibson guitars. Now 19, Curran has already worked with the likes of Jeff Healy, Dave Mason and Les Paul, and has opened shows for Deep Purple and The Scorpions. With a solid classic rock sound infused with Blues, Curran creates highly accessible songs that makes you want to move and sing along. Curran's debut CD, Simplify, features him on vocals and all instruments except for drums. While a Community College student these days, Curran continues to gig in New York City and with Simplify, is looking to broaden his base outside of the Metro-New York region.

Curran opens Simplify with the title track, a song about getting back to the things and people in your life that are important. The song is set in a fairly simple arrangement an the guitar play is quite reserved, filling in economical bursts as a counter to Curran's plus vocals. The Vibe is somewhat nondescript, although the guitar work is notable and the saxophone sounding like a harmonica is a neat touch. Who You Are has a similar bland feel musically. Again, the guitar work is impressive, and lyrically Curran is no slouch, but there is a reserved sense about the songs thus far on Simplify that detracts from the listening experience. The trend continues of Hypnotruth, a song that feels like it wants to rock hard and resolutely fails to do so. If you listen to the lyrics here, there's an angst and an energy just waiting to be tapped, but Curran keeps the song very low key and compressed.

Curran opens up the flue a bit on Hiding, ripping off some powerful guitar licks on the introduction, but he draws back as soon as the verse kicks in. Curran puts his guitar to work to dispel the doldrums some on Bad News, the best song on the album. There's a heavy blues feel here, and Curran's guitar work is primo. Vocally he's still a bit reserved, but there's enough going on around him so that it doesn't matter quite so much here. Curran closes up shop with Tune In, another tune that never quite opens up. The guitar work, as always, is excellent, but there's a reticence that Curran never seems to lose throughout Simplify.

If I had to pick one word for Simplify it would be flat. Curran is a strong guitarist and not a bad songwriter, but as a vocalist it seems like he may have just one level; resulting in the perception perhaps that Curran had better things to do the day he recorded these songs. There is real potential here, and Curran has a decent vocal sound thanks to Operatic training, but the energy level never changes, and it's fairly compressed on the instrumental side as well. Simplify has promise, but perhaps Curran took the title a bit too seriously.

You can learn more about Matthew Curran at http://www.matthewcurran.com/ or www.myspace.com/matthewcurran. You can purchase Simplify on CD from CDBaby.com, or you can get the download from iTunes.
Posted by Wildy at 5:00 AM